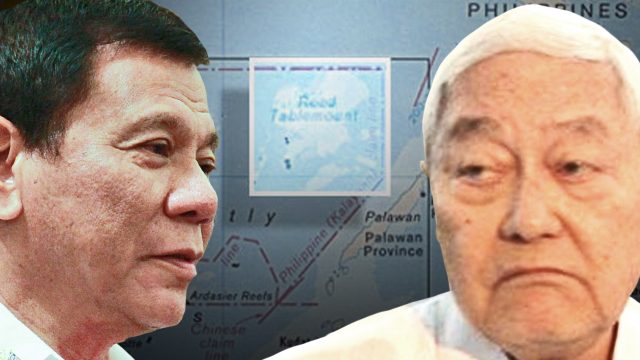 Facebook Twitter Copy URL
Copied
It's no secret President Rodrigo Duterte dislikes tycoon Roberto Ongpin. But Duterte's friendly approach toward China may be the key Ongpin has long been waiting for to unlock a natural gas windfall in the South China Sea.

MANILA, Philippines – President Rodrigo Duterte has tagged Roberto Ongpin as an “oligarch” who must be destroyed, but the government’s policies may in time just end up making the tycoon a hefty profit.

Ongpin is the chairman of mining and energy firm Atok-Big Wedge Company Incorporated, which has an investment in a London-based firm that was granted the rights to explore for oil and gas reserves in the Reed Bank (also called Recto Bank) through government-awarded Service Contract No. 72 (SC 72).

Since Duterte is now changing the geopolitics in the disputed sea, the Philippine President’s pivot to China and the warming of ties between the two countries has perked up hopes.

Ongpin stressed this to the stockholders of Atok-Big Wedge in the publicly listed firm’s annual meeting last May 10.

“I feel confident that there will be a commercial development [in the Reed Bank], maybe not this year, maybe not next year, but fairly soon because of the total change in relations,” he said.

Thanks to Duterte, the Reed Bank’s prospects seem to be among the few bright spots at the moment in Ongpin‘s controversial business career.

The former Marcos trade minister and the 13th richest Filipino has been embroiled in one predicament after another.

Duterte’s tirades prompted Ongpin to resign as chairman of gaming firm PhilWeb Corporation not long after Duterte won the presidential election in 2016.

Atok and PhilWeb were the only listed firms he was featured on the boards of since the Securities and Exchange Commission (SEC) ordered him to relinquish his position in any of the publicly listed companies in the Philippines. The SEC accused Ongpin of engaging in “insider trading” in connection with the 2009 sale of Philex Mining shares.

He remains on the board of Atok-Big Wedge since the Court of Appeals issued a temporary restraining order on the SEC ruling.

The Philippine Stock Exchange (PSE) also previously disqualified Ongpin from sitting on the board of any company seeking a stock debut. This followed the 2014 forced delisting of Ongpin-led luxury property firm Alphaland Corporation over disclosure violations.

That snowballed into other listed firms Ongpin was part of. He later left the boards of giant conglomerate San Miguel Corporation and oil giant Petron Corporation.

Ongpin‘s connection to the Reed Bank oil and gas project did not just start when he acquired a controlling stake in Atok-Big Wedge, a penny stock, in 2009.

It wasn’t just also when Ongpin announced in 2012 that Atok would focus on oil and gas exploration after a deal between Atok and a Norwegian company to acquire a mining site in Mindoro went bust.

Ongpin told the Atok stockholders that drilling actually took place in the Reed Bank’s Sampaguita field, located in the southern part of the SC 72 concession, during his time in government under the late strongman Ferdinand Marcos.

“There have been 6 wells drilled in the Sampaguita field. These wells were actually drilled during Marcos’ time when I was in government [as trade minister],” Ongpin said.

“At the time, technology for extracting natural gas was not available in the mid-’80s so every one of those wells were considered a failure because there was just gas and not oil. Subsequently, the technology for commercializing natural gas was developed around 10 years ago and so the old image of these 6 wells [as] all dry and no good all of a sudden changed,” he added.

SC 72 covers a total of 900,000 hectares off the northwest coast of Palawan. Indeed the advent of technology for extracting gas has made the potential value of the proven wells skyrocket.

Atok, which reported a net loss of P33.36 million in 2016, currently does not have an active operating mine. It is banking only on the prospects of its minority stake in Forum Energy Ltd, which has a 70% interest in SC 72.

After an earnings call last March, Atok now has a 20% stake in Forum Energy, while PXP Energy Corporation (formerly known as Philex Petroleum, a unit of Philex Mining), owns almost 80%.

The Philex group is controlled by businessman Manuel Pangilinan.

5x the size of Malampaya

Ongpin told stockholders that the Sampaguita field in the Reed Bank has the potential to eclipse the nearby Malampaya gas field.

The Malampaya gas platform has been in production since 2001 and has contributed $8.7 billion to government revenues as of 2016. The government has a 10% stake in the project, while Shell Philippines and Chevron each have 45% stakes.

“It must be [around] $210 billion that [the entire Malampaya consortium] got out of it. If you consider that SC 72 is 5 times the size of Malampaya, then the numbers become astronomical. That’s the value of the 20% stake Atok has in SC 72 [via Forum Energy] once it is developed,” he added.

Exploration works in the Reed Bank have been in limbo since the previous Aquino administration due to the maritime row. In 2015, the Department of Energy suspended operations in the area as the Philippines pursued international arbitration. (READ: Aquino hits China over 2 ships in Recto Bank)

But under Duterte, the Philippines and China are on good terms. Duterte was in Beijing for the Belt and Road Forum for International Cooperation from May 14 to 15, affirming the Philippines’ support for China’s ambitious economic plan.

“I have a fairly optimistic view now because of the warming up of Philippine-China relations… It’s been in limbo for the last 4-5 years because China has laid claim to the entire South China Sea. That’s put SC 72 at issue,” Ongpin said.

“This is really the huge hidden value for Atok,” he added. (READ: Cayetano on joint dev’t in South China Sea: Check Constitution first)

For Atok-Big Wedge president Eric Recto, the firm’s infusion of $2 million into Forum Energy earlier this year is a sign of its growing confidence.

Recto also noted that tapping rich reserves in the Reed Bank would benefit the government, especially as Malampaya’s reserves are projected to run out by 2025.

“The economic considerations are very clear. It is better than Malampaya and so the investment required will be substantially more than Malampaya. That investment will be made if we had unfettered access to the area,” he said.

“Government will stand to benefit. We stand as a country to be able to be more self-reliant in terms of our energy needs, so all things considered we should get this going. But obviously we want to do it in a way that does not exacerbate tensions,” he added.

Recto also doesn’t think the hostility between Ongpin and the President will stand in the way of the area eventually being developed, given that Atok is only a minority partner.

“I don’t think it will be an issue. Forum Energy is controlled by PXP Energy. They’re the ones calling the shots, we’re not. That makes a big difference.” – Rappler.com