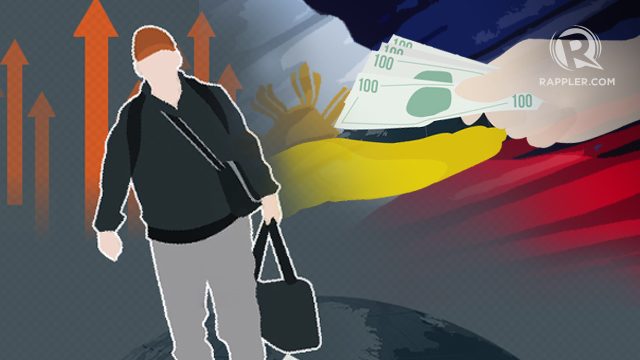 Facebook Twitter Copy URL
Copied
This is the lowest level cash remittances have totaled since registering $1.997 billion in January 2016

MANILA, Philippines – Cash remittances or those coursed through banks by overseas Filipino workers (OFWs) dropped to their lowest level in 15 months last April.

The April result comes after the record $2.615 billion seen last March, and is the lowest level cash remittances have totaled since registering $1.997 billion in January 2016. The central bank attributed the drop partly to the decline in remittances from Saudi Arabia.

President Rodrigo Duterte brought home 138 stranded OFWs during his state visit to Saudi Arabia in April under an amnesty program.

Besides Saudi Arabia, there were also declines in Singapore, Australia, and the United Kingdom.

The BSP also noted that the lower US dollar value of remittances in April could be partly due to the depreciation of major host countries’ currencies vis-à-vis the US dollar, such as the Singaporean dollar, Australian dollar, pound sterling, and the euro as well as the lower number of banking days in April.

At the same time, personal remittances from OFWs in April also dropped by 5.2% to $2.317 billion compared to the $2.443 billion seen in the same month last year.