MANILA, Philippines (UPDATED) – Tutuban, Tondo, Caloocan, and Valenzuela in Metro Manila, as well as Meycauayan and Marilao in Bulacan, will be the first 6 stations of a mass transit railway that will connect commuters from Manila to Clark International Airport in Pampanga.

This was announced by the Department of Transportation (DOTr) a day ahead of a station marking event for the P225-billion Manila-Clark Railway, which will be funded through official development assistance (ODA) from Japan.

The project that will once again connect Central Luzon and Metro Manila by rail “will be completed under the Duterte administration,” Transportation Secretary Arthur Tugade said in a statement on Sunday, June 25.

Eleven other stations are Bocaue, Balagtas, Guiguinto, Malolos, and Calumpit in Bulacan, plus Apalit, San Fernando, Angeles, Clark, and Clark International Airport in Pampanga, and the proposed New Clark City in Tarlac.

The 106-kilometer railway project is one of the “high-impact projects” of President Rodrigo Duterte under the government’s “Build Build Build” infrastructure program. 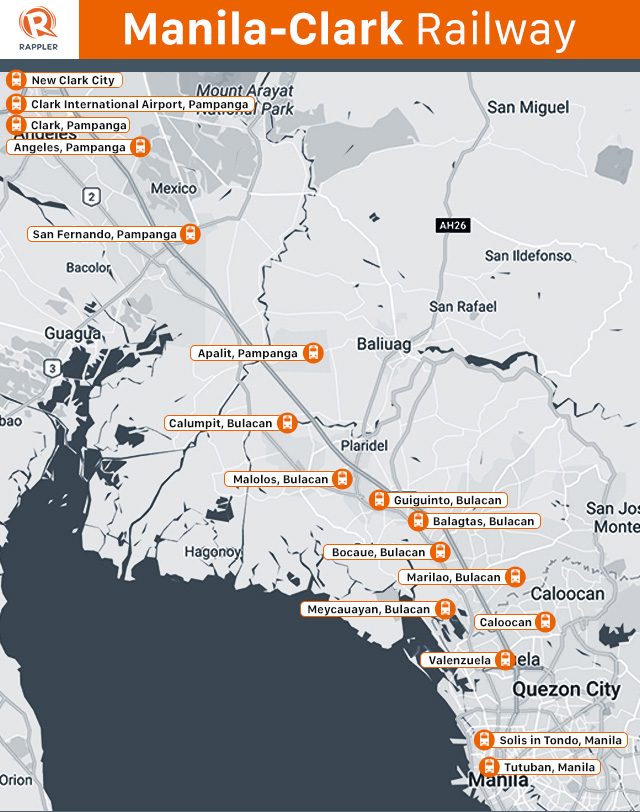 With this rail project, the DOTr aims to cut the two-hour travel time from Manila to Clark to 55 minutes. (READ: Tugade to formalize Manila-Clark train plan in 90 days)

“The rail system stands to benefit 350,000 passengers daily on its first year of operations,” said the transportation department.

“This project will ease traffic congestion and help thousands of commuters coming from Bulacan and Pampanga who travel daily to their workplaces or schools in Metro Manila,” Magno said.

The whole line will have 13 train sets with 8 cars or coaches per train set. Each train can reach a maximum speed of 120 kilometers per hour.

In June 2016, Duterte told the media that Chinese diplomats offered to fund and build the project in two years. A year later, the transportation department said the project would be funded through ODA from Japan. – Rappler.com