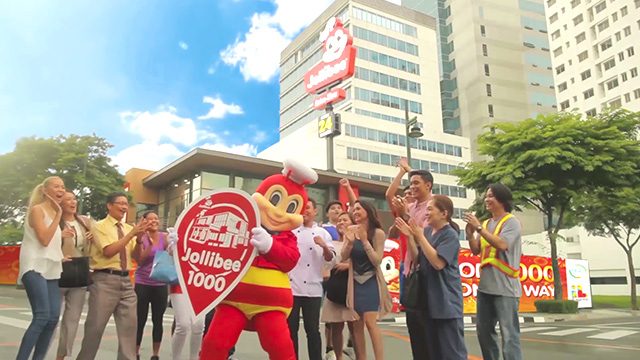 Facebook Twitter Copy URL
Copied
Jollibee says it has allotted P14 billion for capital expenditures in 2017, more than half to be spent on store expansion and renovation

“[A]ll roads now lead to Bonifacio Global City Triangle Drive in Taguig for the opening of Jollibee’s 1000th store in the Philippines. Celebrate this milestone with us during our grand opening on July 4, 2017,” the business empire of Tony Tan Caktiong announced on its official website.

Bonifacio Global City is largely dominated by McDonald’s, which has more outlets in the area than Jollibee. (READ: Jollibee to continue stinging McDonald’s despite labor issues)

Golden Arches Development Corporation (GADC), which holds the exclusive franchise to operate McDonald’s in the Philippines, ended 2016 with 7 branches in Bonifacio Global City, compared  to Jollibee’s 3 stores in the business district as of end-2016.

Although the Andrew Tan-led company blocks Jollibee in BGC, Jollibee remains in the lead in terms of the entire Taguig City, closing 2016 with 9 stores. McDonald’s has  8 branches in the city as of 2016. Jollibee’s story began in 1975 when Tan Caktiong opened an ice cream parlor in Cubao, Quezon City. He then moved to expand into more types of food like hamburgers, fried chicken, and sweet spaghetti.

To sustain the company’s continued growth, Jollibee said it allotted P14 billion for capital expenditures in 2017.