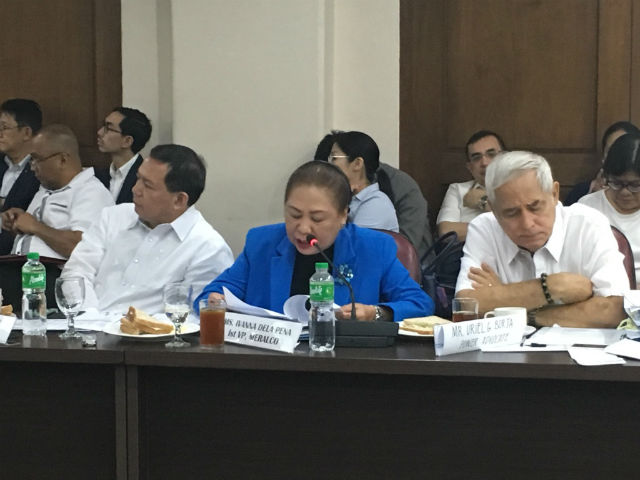 MANILA, Philippines – The Manila Electric Company (Meralco) maintained there is nothing anomalous about its applications for power supply agreements (PSAs) on 7 coal-fired power plants, which were filed before the Energy Regulatory Commission (ERC).

Meralco first vice president Ivanna de la Peña made the statement as the House committee on good government and public accountability looked into the Meralco-ERC contracts on Tuesday, July 4.

“Meralco’s 7 long-term PSAs filed before the ERC in April 2016 are not midnight deals. Discussions with power project proponents started as far back as 2012,” said De La Peña.

She was referring to the PSA applications for the following:

According to De La Peña, the PSAs were executed to “ensure least cost of power for captive customers and to shield such customers from price spikes in the WESM (Wholesale Electricity Spot Market).”

“They represented the least cost among all offers received by Meralco,” she added.

The investigation in aid of legislation was initiated by Bayan Muna Representative Carlos Zarate. Under House Resolution Number 566, Zarate pointed out that the Department of Energy and the ERC previously ordered distribution utilities to conduct a competitive selection process when entering into PSAs.

PSAs should be subjected to competitive bidding in order to stop the practice of self-negotiated generation rates.

The ERC, however, moved the implementation of the competitive bidding process from November 6, 2015 to April 30, 2016, allowing Meralco to apply for the PSAs without having to undergo the competitive selection process.

“The resulting damage to the consumers arising from the said midnight 20-year contracts would easily translate to P12.44 billion a year,” said Zarate.

“Historically, Meralco data showed that it pays its sister generators up to 20% (P1 per kilowatt hour) higher rates compared to unrelated generators and the difference between the rates from competitive bidding and self-negotiated rates [is] at P0.50 per kWh,” he added.

“Distribution utilities and electric cooperatives would have been exposed to questionable or nuisance bids from less or non-qualified parties who would question the entire bidding process,” De La Peña said.

“Numerous distribution utilities would have been wholly dependent on WESM, subjecting them to the vagaries and uncertainties of WESM prices,” she added.

Civil society organizations have urged the ERC to reject the PSA applications for the 7 coal-fired power plants.