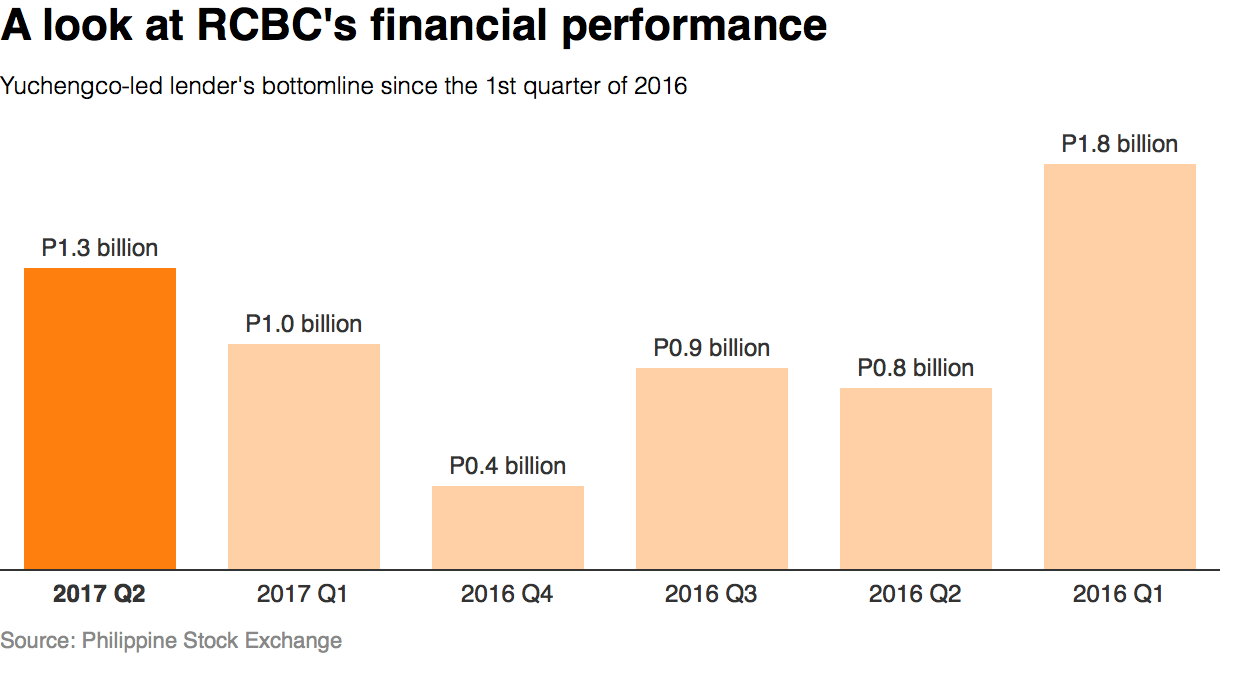 MANILA, Philippines – Earnings of listed Rizal Commercial Banking Corporation (RCBC) in the 1st 6 months of the year still slipped, even if it booked 67% income growth in the 2nd quarter, which was fueled by higher net interest profit, among others.

RCBC told the local bourse that its net income was P2.35 billion from January to June this year, about P260 million lower than the P2.61 billion booked in the same period last year.

This was mainly driven by the 16% rise in net interest income as well as a 56% increase in trading gains and 140% climb in its fee-based income.

“Riding on the wave of the 1st half performance, the bank embarked on a major brand initiative in July, where a new corporate logo and tagline, ‘We Believe in You,’ was officially launched to the public,” RCBC president and chief executive officer Gil Buenaventura said in a disclosure.

Buenaventura said the milestone signals the arrival of a more committed and reenergized RCBC that is ready to meet the demands of the ever-changing Philippine banking industry.

“With the simpler, younger, and more minimalist new logo, RCBC sets its sights [on being] more accessible to the younger Filipino depositors, who are looking for better ways to save and grow their money,” he added.

The rebranding of the country’s 10th largest lender comes after its entanglement in the $81-million Bangladesh Bank fund heist, where it was fined the single biggest monetary fine of P1 billion for non-compliance with banking regulations.

Hackers tried to steal close to $1 billion from the Bangladesh Bank account with the Federal Reserve Bank of New York in February 2016. The US bank was able to stop 30 of the 35 transactions.

However, 5 transactions involving $81 million entered the Philippines via RCBC through several fictitious accounts, of which funds were laundered in several casinos. RCBC named new top management members, including the bank president, after this incident.

As of the 1st half of 2017, RCBC has a consolidated network of 495 branches and 1,511 automated teller machines (ATMs) nationwide. – Rappler.com