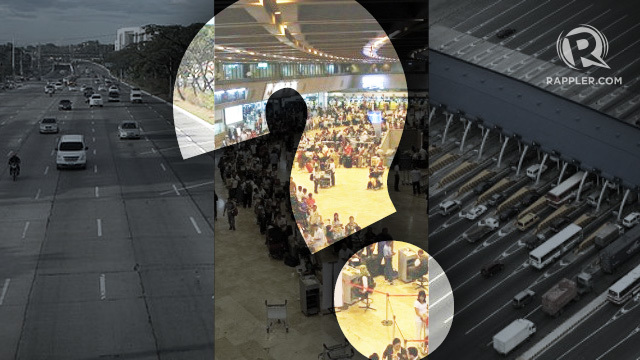 MANILA, Philippines – From an array of over 40 infrastructure projects when the Aquino administration ended, private investors can now only choose from 21 deals to participate in, as the Duterte administration decided to fund most projects through foreign loans or from the government’s own budget.

“That is quite a drop, so our goal now is to rebuild our pipeline. If you look at the space of LGUs, there is a big opportunity for smaller projects that could also be PPPs,” PPP Center Executive Director Ferdinand Pecson said during the 2nd Annual Philippines Energy and Infrastructure Finance Forum hosted by Euromoney in Makati City on Thursday, September 7.

Even the once-shelved Metro Manila Subway Project is being revived by the Duterte administration, with a plan to fund it via official development assistance (ODA) from the Japan International Cooperation Agency (JICA). Under the Aquino administration, the subway project was once under the PPP pipeline but was shelved due to time constraints.

Finance Secretary Carlos Dominguez III had said that the Duterte administration’s decision to veer away from PPPs will fast-track completion and reduce costs. (READ: PH’s PPP thrust: Work in progress)

To adjust to the shift, Pecson said the PPP Center is talking to LGUs for new prospective projects.

“Even with the shift, PPP in the Philippines is still very much alive. Private sector participation in infrastructure will always be there [even though] it may not be given the same attention as the previous administration did,” Pecson told reporters on the sidelines of the forum.

Pecson said his office is in talks with the Zamboanga City Special Economic Zone Authority (ZamboEcozone) for a plan to construct a “world-class seaport to be located within the First Industrial Park of ZamboEcozone.” (READ: Ties with China to fill infra spending gap, pose risk to PPP)

He added that the PPP Center also received applications for Project Development and Monitoring Facility (PDMF) support for the following projects:

“We will be more aggressive in introducing to LGUs that this is how they can tap into the PPP program. On September 17, with Asian Development Bank, we will bring together LGU executives, financiers, bankers, investors on how to make the most of the program,” Pecson said.

However, Fitch Group think tank BMI Research on Thursday said it is seeing evidence that Chinese and Japanese firms are becoming the top beneficiaries of the greater investment and project opportunities available in the country.

“We expect this trend to continue to manifest with the number of project opportunities remaining significant. Our key projects database indicates that there is still $63 billion worth of planned projects that have not yet entered the tendering or contracting phases,” BMI Research added.

The National Economic and Development Authority (NEDA) had said that bulk of the P7.1-trillion total infrastructure investment requirement under the 2017-2022 Public Investment Program will be implemented through local financing.

About P4.7 trillion or 66% will be done through local financing, while only P1.3 trillion or 18% will be through PPPs. The remaining, meanwhile, will be in the form of ODA.

“Like I said, we need you guys. Please don’t be discouraged by just the fact that there are more ODAs right now… When we talk again next year, there will be more [projects],” Pecson added. – Rappler.com