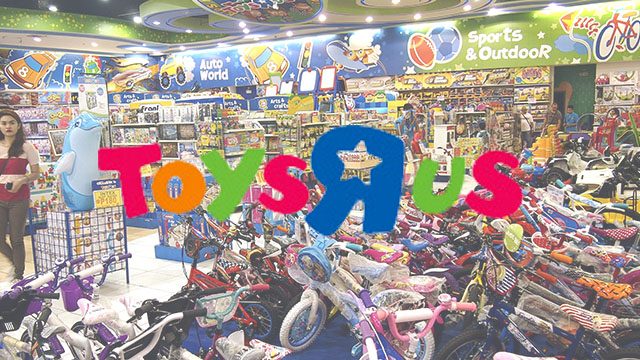 Facebook Twitter Copy URL
Copied
Operated by the Gokongweis, Toys 'R' Us Philippines clarifies it is not part of Toys 'R' Us Incorporated's bankruptcy filing in the United States

MANILA, Philippines – For now, 34 stand-alone stores and 44 outlets of Toys “R” Us in the Philippines remain open, with their operations not affected by the bankruptcy filing of the toy store chain in the United States.

Operated by the Gokongweis’ Robinsons Toys Incorporated, Toys “R” Us Philippines clarified on Wednesday, September 20, that it is not part of Toys “R” Us Incorporated’s voluntary filing of Chapter 11 or financial restructuring to enable the company to improve its resources and strengthen its competitive position.

Robinsons Toys released the statement following news that the largest US toy store chain has filed for bankruptcy protection in the US and Canada in the face of a long-term debt of over $5 billion.

“At Toys ‘R’ Us Philippines, business will operate as usual and we will continue to provide great service and a wide assortment of toys especially for this holiday season,” Celina Chua, general manager of Toys “R” Us Philippines, said in a statement.

Toys “R” Us Philippines is a sub-licensee of Toys “R” Us (Asia), which is not part of the court-supervised financial restructuring. It operates 34 stand-alone stores and 44 Toybox outlets inside Robinsons Department Store branches.

While the bankruptcy filing may cause worry among retailers, Toys “R” Us (Asia) said the company continues to significantly grow and invest in the region.

“Toys ‘R’ Us (Asia) is open for business and continuing to serve our customers as we always do. We are a financially robust and self-funding retail operation,” said its president Andre Javes.

It operates as a separate legal entity and is financially independent from all other Toys “R” Us operating companies around the world.

Javes was also quoted in the statement as saying that Toys “R” Us (Asia) has been opening new stores in the region.

He said his company and its subsidiaries operate 226 stores in Greater China and Southeast Asia, including Brunei, China, Hong Kong, Malaysia, Singapore, Taiwan and Thailand. It also licensed 35 more stand-alone stores in the Philippines and Macau.

In March 2017, Toys “R” Us Japan was successfully integrated into Toys “R” Us (Asia), which added 161 stores to the pan-Asia toy store chain.

“Our teams are committed to excite our customers with unique and differentiated ranges, both online and a thrilling hands-on experience in store,” said Javes.

In the face of online competition, retailers in the Philippines have been partnering with e-commerce and logistics firms to widen their reach.

SM Investments Corporation, the largest retailer in the country, has taken steps into e-commerce through a partnership with the country’s largest online platform, Lazada, to sell wares from its SM Store.

Its local rival, Ayala Corporation, has made moves of its own by acquiring online fashion platform Zalora, with which it hopes to create online and offline retailing synergies. – Rappler.com