Sep 26, 2017 8:15 PM PHT
Chris Schnabel
Facebook Twitter Copy URL
Copied
The Asian Development Bank retains its forecast of 6.5% GDP growth for 2017 and 6.7% for 2018, while noting that infrastructure investment and receding inflation will fuel the economy 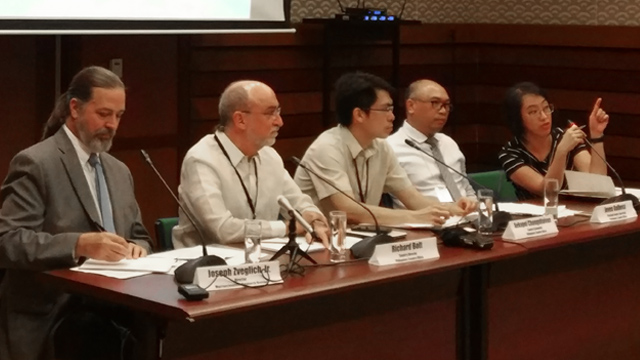 MANILA, Philippines – The Asian Development Bank (ADB) retained its projections for the Philippines as it sees no signs that the country’s economy could be overheating amid rapid growth.

The multilateral lender retained the growth forecasts it made last July, at 6.5% for 2017 and 6.7% for 2018, in its Asian Development Outlook 2017 Update released on Tuesday, September 26.

“The concerted effort by the Philippine government to improve public project implementation is bearing fruit as public investment programs help drive continued economic expansion,” said ADB country director for the Philippines Richard Bolt during the launch of the report.

“A strong focus on infrastructure investment and implementation of the tax reform program will see the country continue its growth momentum through 2018,” he added.

The ADB noted in its report that fixed investment grew by 12.1%, reaching its highest share as percentage of gross domestic product (GDP) in over a decade at 25.8%.

The multilateral lender is also not concerned with the prospect of the economy overheating despite recent warnings from other institutions, such as the International Monetary Fund (IMF) and DBS Bank Ltd of Singapore.

Overheating of an economy generally refers to a rapid rise in inflation, and a subsequent diminishing of consumer purchasing power, due to productive capacity being unable to keep up with the demand generated by rapid growth.

“If you look at inflation targets, they have been readjusted downwards. Food supply and agricultural production is moving up more than expected and prices of fuel have stabilized and have remained low,” said Joven Balbosa, ADB principal specialist for the Philippines.

The ADB report also said inflation remains between the Bangko Sentral ng Pilipinas’ target of 2% to 4% even though it rose to 3.1% from January to August of this year compared to 1.5% in the same period in 2016.

“It’s the demand side that is pushing inflation up but that is expected of a growing economy. If you go out to the other regions, there is a lot of headroom that can be explored so for me, the economy has a lot of potential to grow,” Balbosa said.

The economist is also not concerned about the country’s slide into a current account deficit, noting that “pressure from the imports side is expected of a growing economy” and that it should be mitigated by the continued stream of remittances from overseas Filipino workers (OFWs) and receipts from the business process outsourcing (BPO) industry.

The ADB also maintained its July growth forecasts for developing Asia at 5.9% for this year and 5.8% for next year, as a result of the recovery in global trade, robust expansion of major industrial economies, and improved prospects for China.