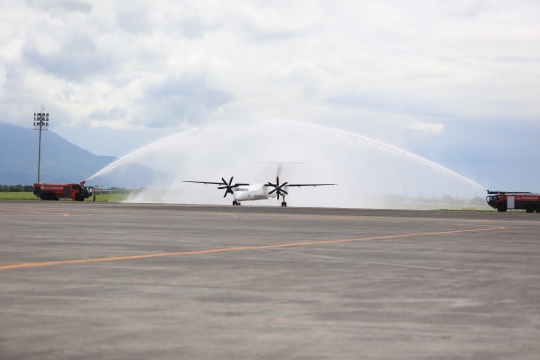 “Rugged and picturesque Basco in Batanes is now a short flight away for leisure travelers from Central and Northern Luzon with the launch on October 1, 2017 of regular PAL flights from Clark International Airport,” the flag carrier announced in a statement.

The new flight is being operated by the carrier’s unit PAL Express. It leaves Clark International Airport at 11:45 am every Monday, Wednesday, Friday, and Sunday. The return flight leaves Basco at 2 pm on the same days.

“The Clark-Basco route offers a convenient direct flight without the need for Central and Northern Luzon passengers to travel by land to Manila,” PAL said.

This new route is part of the flag carrier’s aim to develop Clark as its 3rd hub of operations, following Manila and Cebu.

Meanwhile, the aircraft for the Cebu-Cagayan de Oro and Cebu-Butuan routes were upgraded to the next-generation, dual-class Bombardier Q400 also on Sunday.

The 86-seater Q400 flies twice a day on the Cebu-Cagayan de Oro and Cebu-Butuan routes.

PAL has started taking delivery of 12 new Q400 turboprops that are being used to open new inter-island routes.

The flag carrier is set to open 3 new domestic routes on November 1 from Davao to Zamboanga, Tagbilaran, and Cagayan de Oro. – Rappler.com