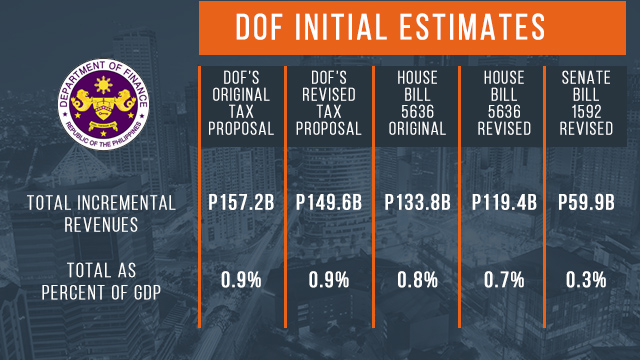 MANILA, Philippines – Socioeconomic Planning Secretary Ernesto Pernia said the Duterte administration’s economic managers will try to convince the Senate to make its version of tax reform “closer” to that of the House of Representatives, to get enough financial muscle needed to implement the country’s ambitious infrastructure program.

According to estimates by the Department of Finance (DOF), the Senate ways and means committee‘s version of the tax reform bill would only yield P59.9 billion in total incremental revenues. This is less than half of the P133.8 billion under the version approved by the House last May.

This is much lower compared to the target revenue yield of P157 billion under the original proposal of the DOF.

If the Senate’s version will be adopted and signed into law, Pernia told reporters the number of infrastructure projects under the ambitious “Build, Build, Build” plan may be reduced.

“That would be the logical conclusion,” Pernia said on the sidelines of the 28th National Statistics Month opening ceremony in Mandaluyong City on Monday, October 2.

If that happens, Pernia said the National Economic and Development Authority (NEDA) will prioritize projects according to their “need, urgency, and likelihood of getting completed.”

In a 3-year rollout, the administration’s infrastructure program includes more than 4,800 projects worth up to P8.4 trillion. (READ: EXPLAINER: Senate, House versions of the tax reform bill)

“We’re still hoping that the Senate version will improve and move closer, if not the same level of the House version, at least. We are working behind the scenes and trying to talk to other senators to support our desire and our aspiration,” Pernia said.

Among the changes the economic team wants, Pernia said, are adjustments in the phasing of excise tax on fuel and value-added tax (VAT) exemptions.

The Senate version on excise tax on petroleum will remain at P6 per liter for the next 3 years. But it made the excise tax in the 1st year lower than the next two years. The Senate committee said this gives Filipino families, especially those with lower income, more time to adjust to the increase.

As liquefied petroleum gas (LPG) is widely used in households for cooking, the Senate lowered its excise tax, adopting a P1-per-liter excise tax every year for 3 years. 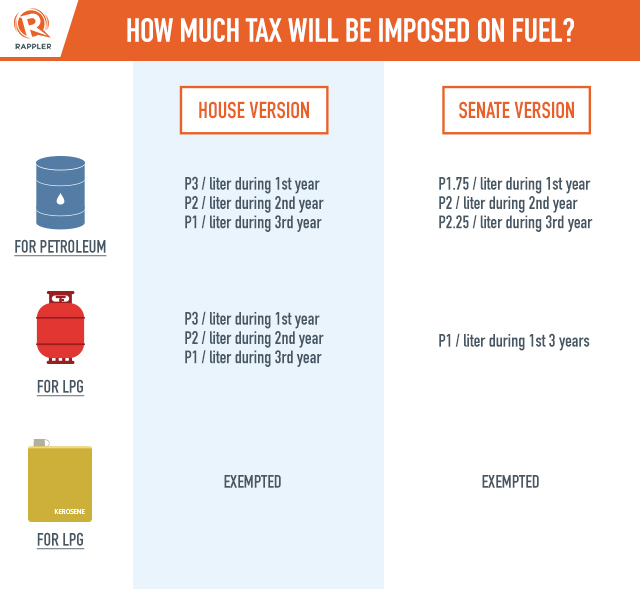 The Senate and the House agreed to exempt kerosene from the tax increases “given that up to 3 million families use it” daily, according to the DOF.

“I think there are a number of things there like the fuel excise tax – the phasing needs to be the same as the House,” Pernia said.

The socioeconomic planning chief added that he is talking with senators to broaden VAT exemptions.

“VAT exemptions really have to be broadened. We have to be comparable to our ASEAN neighbors that really have a broad-based VAT,” Pernia told reporters. “[For] those things, we need to see some improvements.”

Pernia said he is optimistic that implementation of the tax reform package can begin by January 2018.

He said the Senate will need to pass the bill on 3rd reading before going into recess in mid-October, the bicameral conference should conclude in November, and President Rodrigo Duterte will need to sign the bill into law by December 15, to achieve the team’s target date for implementation. – Rappler.com