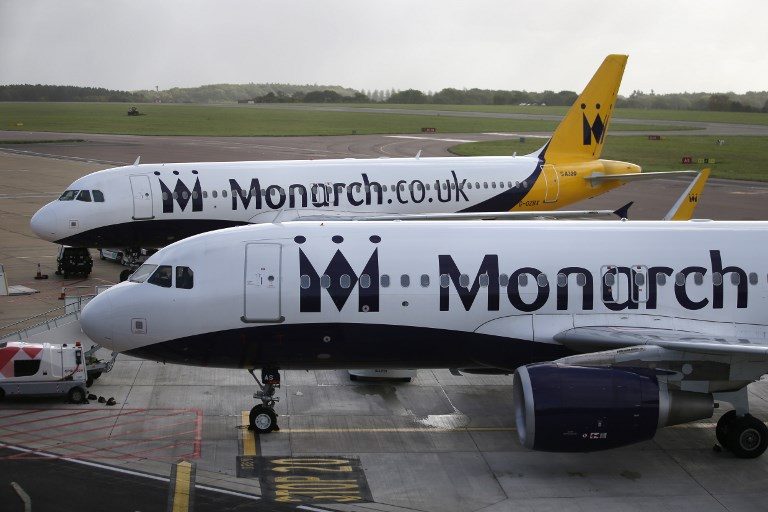 Monarch and its holidays business entered administration, with KPMG appointed to oversee the financial chaos that has left about 2,100 staff likely having to find new employment.

The airline had been struggling financially for a while and won a cash injection a year ago that allowed it to continue flying holidaymakers and fund growth plans, as the sector faced turbulence from Brexit and terrorism.

The UK’s Civil Aviation Authority described Monday’s events as “the biggest ever UK airline failure,” adding that “all future holidays and flights provided by these companies have been cancelled and are no longer operating”.

It added in a statement that “the government has asked the CAA to support Monarch customers currently abroad to get back to the UK at the end of their holiday at no extra cost to them”.

Passengers are being flown back from numerous countries, including France, Greece, Israel and Turkey on aircraft leased by the CAA.

In total, about 410,000 customers are affected by Monarch going into administration, including 300,000 with future bookings, the CAA said.

Qatar Airways had sent A320 aircraft on request by the CAA to repatriate holidaymakers, according to online flight-tracker Flightradar24.

The government said that it was overseeing what it said was the biggest repatriation since the end of World War II.

“This is a hugely distressing situation for British holidaymakers abroad and my first priority is to help them get back to the UK,” Transport Secretary Chris Grayling said in a statement.

“That is why I have immediately ordered the country’s biggest ever peacetime repatriation to fly about 110,000 passengers who could otherwise have been left stranded abroad.”

But the Unite union hit back, saying ministers rebuffed requests by Monarch – Britain’s tenth largest airline according to Euromonitor International – to provide a bridging loan.

“Monarch’s workforce has worked tirelessly and loyally, with great sacrifice, to try and turn the airline around in the last year,” said senior Unite official Oliver Richardson.

“Their hard work has been undone by a government seemingly content to sit on its hands and allow one of the UK’s oldest airlines go into administration.”

The first plane to arrive back in the UK carried 165 passengers from Ibiza.

Affected parties used social media to get their messages across, mirroring a situation a week ago when Ryanair cancelled thousands of flights as it battles to overcome a shortage of pilots.

“Monarch customers in the UK: don’t go to the airport. There will be no more Monarch flights,” the budget carrier said on Twitter.

“But the failure of Monarch is good news for rivals. Shares in Ryanair and EasyJet both rose about three percent in early trading as the market reacted to the news of the demise of Monarch after 50 years in business.” – Rappler.com