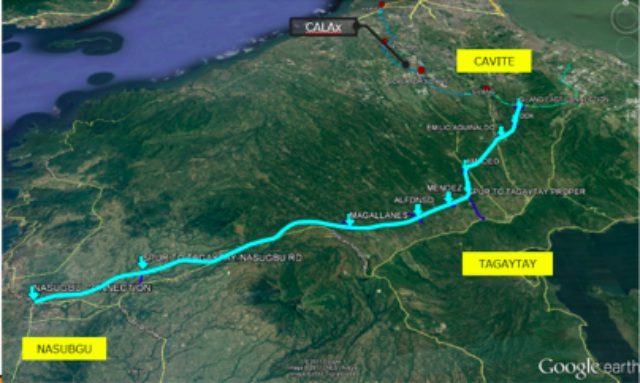 MANILA, Philippines – It will only take less than an hour for motorists from Manila to reach Tagaytay once the 49-kilometer Cavite-Tagaytay-Batangas Expressway (CTBEX) is built, said the tollways unit of Metro Pacific Investments Corporation (MPIC).

“From the current travel time of 2.5 hours on a good day, we expect CTBEX to cut travel time to less than an hour from Manila to Tagaytay,” MPCALA Holdings Incorporated president and chief executive officer Luigi Bautista told reporters in Tagaytay City on Wednesday, October 4.

CTBEX is a 49-kilometer expressway that will connect Cavite and Batangas, with a spur road or a smaller road off it leading to Tagaytay City and ultimately ending in Nasugbu, with another spur road to Tuy.

Bautista said the project will greatly improve access to Tagaytay City and Nasugbu, ensuring faster travel and support for the government’s tourism thrust.

Maria Catalina Cabral, undersecretary for planning and public-private partnership at the Department of Public Works and Highways (DPWH), said her office will decide if it will give the original proponent status to MPCALA Holdings by November.

“We are ready to give the results of the evaluation by November. If there is no conflict, we will give the original proponent status to them,” Cabral said in the media briefing.

Once the National Economic and Development Authority (NEDA) Board approves the project, Cabral said the government will start the Swiss challenge for CTBEX by 2018.

Based on the build-operate-transfer law, other private investors can submit competing offers under a Swiss challenge, while the original proponent will be given the right to match them.

“Under the law, if it is unsolicited, all costs will be carried by the private concessionaire, including the right-of-way acquisition,” Cabral said.

CTBEX will start at the Silang East Interchange of the Cavite-Laguna Expressway (CALAX).

It will traverse the towns of Silang, Amadeo, Mendez, and Alfonso in Cavite, as well as Tagaytay City and Nasugbu in Batangas. It will have 8 major interchanges, two spur roads, and a number of overpasses.

Construction of the expressway is expected to start by the 1st half of 2019 and would be completed by mid-2022. – Rappler.com