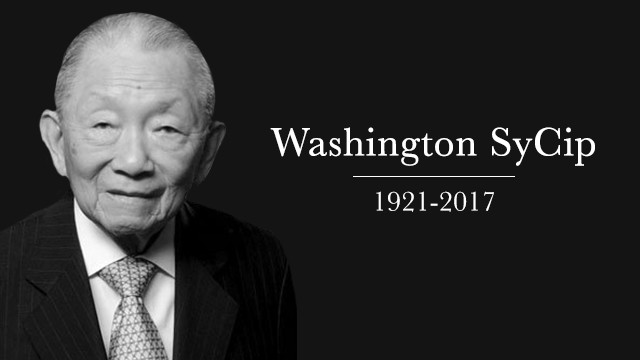 SyCip died on Saturday, October 7, while on a Philippine Airlines (PAL) flight to Vancouver.

SyCip co-founded local accounting firm SGV & Co. in 1946 when the Philippines was rebuilding after World War II. He helped groom it into one of the largest accounting firms in Asia. (READ: The SGV that Washington SyCip left behind)

“With deep sadness, the partners, principals, and staff of SGV & Co. announce the passing of SGV founder Washington SyCip on the 7th of October 2017. Mr SyCip went quietly while on a flight to Vancouver from Manila. He was 96 years old,” SGV & Co. said in a statement.

“The SyCip family requests for some private time at this moment. Information on memorial services to follow. Please pray for the eternal repose of his soul,” the firm added.

Pangilinan said: “Yes. Confirmed. Just spoke to his secretary here. He was on a PAL flight from Manila [to] Vancouver. George Sycip, his son, was with him. His heart stopped and [he] apparently [had] a peaceful and painless death. This happened as the flight approached Vancouver.”

Shortly after his death, SyCip’s friends paid tribute to the tycoon on Sunday.

“Today we mourn the profound loss of a dear boss, friend, and mentor. I owe much of who I am to the privilege of having been under his wing,” Purisima said.

“Washington Sycip was a towering pillar of the Philippine economy. For decades, he stood as an exemplar of excellence and integrity while shining the light of his sage guidance on our business community. Our country will miss the weight of his presence. We will, however, move forward with the gift of his contributions to our society,” the former finance secretary added.

“He’s a great man, one of the best persons I’ve ever met. He loves the country. He is intelligent. He dedicated his entire life to excellence and was instrumental to improving business and society. We will terribly miss him,” said David Balangue, former SGV chairman.

“He is a big loss. He contributed a lot to the accounting industry. His death will create a big vacuum,” shared Roman Felipe Reyes, former senior partner at SGV, and now chairman and co-founder of Reyes Tacandong & Co.

Benjamin Punongbayan, former SGV senior partner and founder of accounting firm Punongbayan & Araullo, described SyCip as “unique” and “one of a kind.”

“I don’t think we will see the likes of him for a very long time,” Punongbayan said.

“He had a very strong passion for the utmost excellence, not only for himself but also for the people around him. I learned much from Wash and for which I am truly grateful to him. He was my mentor and model. I will greatly miss him,” he added.

Gloria Tan Climaco, former SGV chairperson and managing partner, recalled of SyCip: “He always posed this question: How come Filipinos do not perform well when working in the Philippines, but excel when they work abroad? Is management or leadership the problem? It’s a good topic to ponder during these times.”

PAL also paid tribute to SyCip, a member of the flag carrier’s Board of Directors and a board member of sister firms in the Lucio Tan Group of Companies.

“Mr Wash SyCip was a true giant in the world of Philippine business. Beyond founding renowned institutions such as [SGV&Co] and the Asian Institute of Management (AIM), Mr SyCip was a leader, advisor, and guiding force behind many other Filipino businesses and philanthropic organizations, and an advocate for poverty alleviation, public education, and economic freedom,” PAL said in a statement.

“For those of us who had the privilege of working with him and under his guidance, Mr SyCip was a legendary mentor who inspired us to strive for the highest measure of excellence and integrity in the conduct of our business, and in serving the Filipino public. We feel his loss keenly, and will greatly miss his wise counsel and commanding presence.”

AIM, in a statement, described SyCip as a “staunch believer in education and its critical role in uplifting lives and eradicating poverty.”

“His passion for excellence and commitment to mold business leaders, combined with his unfaltering generosity, led to the foundation of the Washington SyCip Graduate School of Business at AIM, which will celebrate its 50th year in 2018,” said AIM.

“Mr SyCip was deeply involved in AIM’s ongoing transformation to revitalize its role in an emerging ASEAN, and strongly supported its efforts to rebrand and expand program offerings for the next wave of business leaders. His passing is a great loss to the institution and the country’s business community, but his legacy will live on in the AIM alumni who strive to be ethical and responsible business leaders, and live up to Mr SyCip’s call to lead, inspire, and transform.”

Born in Manila on June 30, 1921, to Albino and Helen SyCip, Washington SyCip would go on to become one of the foremost practitioners of accounting in the Philippines and Asia, as well as a prime advocate of closer cooperation between the Philippines, the United States, Europe and Asia.

He passed the examination for Certified Public Accountants at age 18, but was too young to receive a professional license to practice. He decided instead to take his PhD in the United States at Columbia University. SyCip was working on his doctoral dissertation when Pearl Harbor and Clark Air Base were bombed. He returned to Manila at the war’s end to be reunited with his family. Seeing great opportunities in the country’s postwar reconstruction, he set up his own accounting firm, W. SyCip & Co., in Binondo. As the business grew, SyCip with his longtime friend Alfredo M. Velayo, renamed the firm SyCip, Gorres, Velayo & Co. (SGV).

After retiring from SGV in 1996, he continues to be active in business and civic endeavors, and sits on the board of many Philippine and international companies and foundations. His advocacies include the improvement of public education, micro finance and entrepreneurship, and public health. He is relentless in his pursuit to help alleviate poverty. A staunch believer in Filipino talent, SyCip is also an avatar of economic freedom.