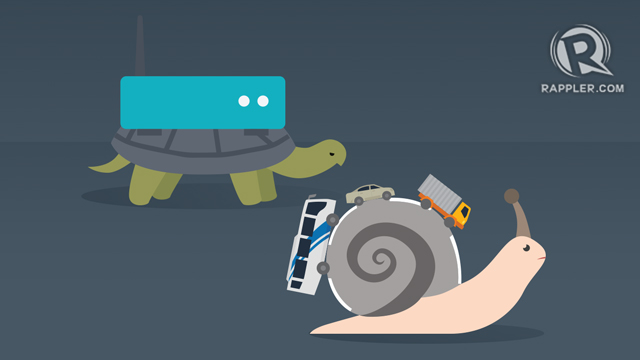 MANILA, Philippines – It is not a secret that the Philippines has infamously poor internet service. Even the acting chief of the Department of Information and Communications Technology (DICT) acknowledges this, likening it to Metro Manila traffic jams.

“The effect of traffic and the effect of the internet speed in the country are the same – slow, congested, and expensive. That is why we have to do something about it,” DICT Undersecretary and Officer-in-Charge Eliseo Rio Jr told civil groups in a conference in Quezon City on Wednesday, October 18.

“We could not be the world’s number one business process outsourcing (BPO) voice service provider if our internet speed is slow and expensive. Our problem is that most of us access internet on the mobile data infrastructure of telcos,” Rio added.

The internet service in the archipelagic country is mainly controlled by two telecommunications giants – PLDT Incorporated and Globe Telecom Incorporated. It was only last August when the Philippine government signed a law providing free Wi-Fi in all public places.

Under Republic Act No. 10929, Rio said the DICT targets to put up around 250,000 access points before the term of President Rodrigo Duterte ends. The plan is to provide connections of at least 4 megabits per second (mbps) to 100 people at every access point.

Rio said deployment of each access point costs about $600. This is on top of the government’s subscription of about P12,000 per megabit per month.

“We lack in cellular towers,” Rio pointed out. “Right now, the Philippines only has around 20,000 cellular towers, when we need at least 67,000 to improve mobile data access.”

But the DICT official said telecommunications providers are not solely to blame for this.

“Building it is expensive. Of course, it won’t make business sense for them to go to underserved areas if they are already making a profit in Metro Manila, especially if they are not being incentivized,” he explained.

To help in this aspect, Rio said the government will construct common towers to be leased out to telecommunications service providers as soon as possible.

Under the National Broadband Plan, these common towers will address the need for 67,000 more cell sites, Rio told reporters on the sidelines of the event.

“We estimate that within 3 years, we can also migrate from the subscribing to telcos to the National Broadband Plan’s common towers. By that time, we won’t need to subscribe to telcos,” he added.

Aside from putting up access points and common towers, Rio said the government will soon have a telecommuting law “to encourage content providers to make people subscribe to high-speed internet from their homes.”

“With these solutions, we can improve internet access at the earliest time possible. We still have a lot of catching up to do,” he added. – Rappler.com