MANILA, Philippines — Do you think you had a busy Wednesday?

If so, spare a thought for Chinese business icon and Alibaba Group founder Jack Ma who jetted into Manila late Tuesday night, October 24, ahead of a whirlwind 24 hours in the capital.

Here’s a peek into the how the internet billionaire spent his time in Manila. (LIVE: Jack Ma in Manila)

Tuesday night, October 24 – Ma arrived in Manila and immediately held an hours-long meeting with Alibaba staff over how to develop e-commerce in the Philippines.

After Alibaba and Amazon dominated the e-commerce business in their home markets, the two giants are now battling it out in Southeast Asia, starting with Singapore.

A New York Times report said the two giants are spending billions of dollars on Southeast Asia and India, as they look for a market that could duplicate China’s successful transformation into the world’s largest online shopping market.

Wednesday, October 25 (10 am to 12 pm) – The Alibaba founder received a Doctor of Science in Technopreneurship Honoris Causa from De La Salle University (DLSU) and capped it with a lecture to his new “fellow schoolmates” on how technology is rapidly changing how the world views sustainability.

Ma participated in two roundtables: first with DLSU student leaders, and then with Go Negosyo Chairman Joey Concepcion, Presidential Adviser for Entrepreneurship. He discussed topics ranging from the country’s slow internet to why he thinks the Philippines can be a world beater in fintech.

Even the ever-optimistic Alibaba chief expressed frustration over the country’s “no good” internet. This was during the DLSU forum attended by Globe and PLDT executives.

The Alibaba head then had a formal press conference where he discussed the group’s strategy in the Philippines, the importance of its existing partnerships, and the role Chinese-Filipinos can play in bringing the two nations closer together.

Wednesday, October 25 (1 pm to 3:30 pm) – Ma rushed to Malacañang to pay a courtesy call on the President. Those who joined the meeting were Finance Secretary Carlos Dominguez III, Senator Richard Gordon, and Special Assistant to the President Bong Go. Since Office of the President did not disclose what Ma discussed with Duterte and the Philippine officials, some reporters wondered if Dominguez and Ma talked about the issue of online listings of fake cigarette tax stamps once advertised on alibaba.com.

Back in March, Dominguez wrote an open letter to Ma, asking Alibaba to cooperate with the Philippine government by immediately stopping such advertisements and prohibiting them in the future. The following month, Ma took down Alibaba’s online listings that advertise the sale of fake cigarette stamps.

Malacañang photos of the meeting showed Ma and the Philippine officials led by Duterte sharing a light moment, as they smiled while doing Duterte’s signature fist-bump pose.

After his meeting with the President, the Chinese tycoon faced Malacañang reporters. A jovial Ma readily granted selfie requests from the media. The business icon even entertained a question from the reporters while waiting for his car at the Palace driveway.

Asked how his meeting went with Duterte, Ma said: “Perfect… It was good.”

Wednesday, October 25 (4 pm to 6 pm) – Of course, Ma wouldn’t pay a visit to the Philippines without meeting with his local business partners: Globe Telecom officials.

Before gracing the first real product launch of its joint venture with Globe, one of the telco’s corporate communications officers told Rappler that Ma had a short business meeting with the Zobel de Ayalas at The Ascott in Makati. (READ: Globe and PLDT battle it out in cashless payments) 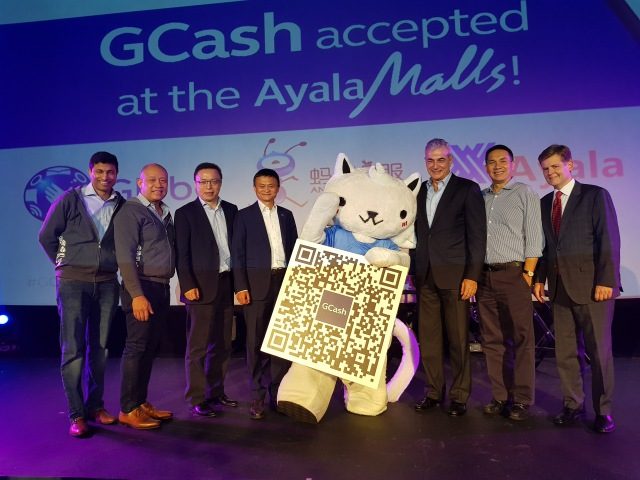 Asia’s richest man then went on to try the purchase-by-scan system of GCash, which was initially launched at Ayala-owned Glorietta 4 mall in Makati. This was the by-product of the strategic alliance between Ma’s Ant Financial Services Group and Ayala’s Globe Telecom.

Around 5 pm, Ma, together with Globe co-vice chairman Fernando Zobel de Ayala and president and chief executive Ernest Cu, arrived at the official media launch of GCash’s purchase-by-scan system. This product is similar to Ant Financial’s Alipay, which is popular in China.

Ma was still all smiles late Wednesday afternoon and even sneaked in a selfie as he sat beside the officials of Ayala group.

Ma, however, left early and did not join the press conference to catch his other scheduled engagements.

After all, he has an over $23-billion e-commerce empire to run. Ma is currently the world’s 23rd wealthiest man, with an estimated net worth of $38.3 billion, said Forbes magazine. – with reports from Pia Ranada/Rappler.com