Japan reaches out to ASEAN startups

MANILA, Philippines – Japan is playing catch-up in the vibrant and growing startup community in Southeast Asia, after another Asian giant, China, has been leading in funding and engaging with technology-based firms in the region.

In the past two years, the share of Japanese venture investment into member countries of the Association of Southeast Asian Nations (ASEAN) increased from 18% to 32%. Naotaka Nishiyama, regional head of Asia at consulting firm Deloitte Tohmatsu Venture Support Company, highlighted this at the ASEAN-Japan Fair held during the ASEAN Business and Investment Summit on Monday, November 13.

ASEAN startups received around $3.2 billion in investments last year, and the figure is projected to hit almost $5 billion this year, according to US-based research firm CB Insights.

Of the almost $8.2 billion invested in the past two years, CB Insights’ research also showed that investment in the region’s startups by Chinese firms accounted for around $3.27 billion. These investments have been led by technology giants Alibaba, Baidu, and Tencent.

The biggest investment announced in an ASEAN startup so far this year, the P2-billion investment in Singapore-based Grab, was also led by a Chinese firm – Didi Chuxing. 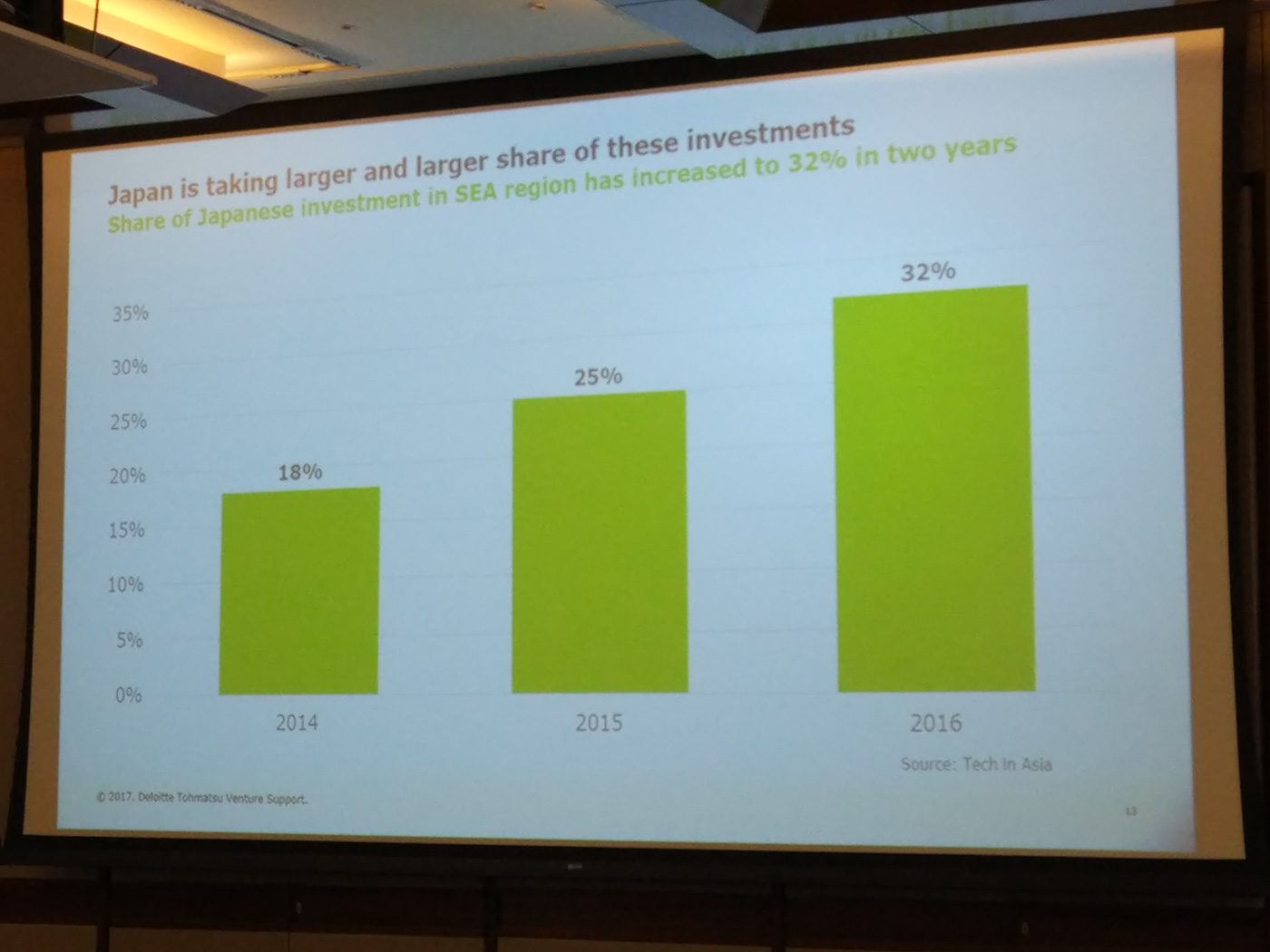 Japan is positioning for a bigger role as global funders are also eyeing a piece of the startup action in Asia in general.

Investments in Asian startups accounted for 40% of total global flows in 2016. Back in 2013, Asians only cornered 10% of the $130 billion invested in startups worldwide. The shift is largely due to the weaknesses in Japan’s domestic market.

“Our economy is rapidly changing towards the digital era. However… we don’t have enough software knowledge and experience in Japan. We also lack ingenuity for creating new innovation,” Nishiyama explained.

“Large Japanese firms have mass manufacturing facilities for devices and machines. But they often lack software expertise,” he added. “Overseas markets produce new business models that may not have been thought of in Japan, so we can learn from them and apply these in Japan.”

This led major Japanese firms to look for and start investing in startups in new and prominent markets.

Last August for instance, the world’s top carmaker, Toyota, also invested in Grab under its new Next Technology Fund, which will see the automaker actively work with Grab to create a new mobility platform through the use of artificial intelligence (AI).

This is one area in designing smart, internet-enabled sensors for devices that, Nishiyima noted, shows vast potential for collaborations between ASEAN startups and Japanese investors.

Another area of opportunity is in healthcare, given Japan’s demographics.

“Japan is the number one aging country in the world with the population expected to decrease from 127 million to 100 million by 2060. We need solutions for smart care for the elderly, nurseries, assisted robotics, remote healthcare, and so forth,” said Nishiyama.

More evidence of Japan’s newfound enthusiasm for engaging ASEAN startups can be seen in a project to nurture new industries.

The project, run by the Japan External Trade Organization (JETRO), has so far invested $1.2 million in 10 startups in the region. Of these, 3 projects are startups focused on the Philippines, according to Shuichi Hirano, business development director at JETRO.

These include Global Mobility Systems, a fintech startup launched in the Philippines that aims to make it easier for Filipinos to get auto or motorcycle loans.

Another is Informatix, an IT firm that makes it easier for Filipinos to obtain the necessary IT qualifications to work in Japan by partnering with a non-governmental organization to develop a standardized certification program.

Hirano also noted that JETRO has partnered with the Department of Trade and Industry (DTI) to find more Philippine-focused startups that it could help fund.

Trade Undersecretary Nora Terrado noted that the current collaborations also present an ideal template for development given that micro and small enterprises are the engine of growth around ASEAN. (READ: Duterte to pour ‘billions of pesos’ into funding for MSMEs)

“Japan is a major trading partner of the Philippines and we continue to hope that this partnership will lead us to greater breakthroughs where our economies mutually benefit,” Terrado said. “[The firms being funded by JETRO] are examples of those that want to make a difference in the world.” – Rappler.com