Sy, Zobel still in, Aboitiz out of Forbes’ list of Asia’s richest families 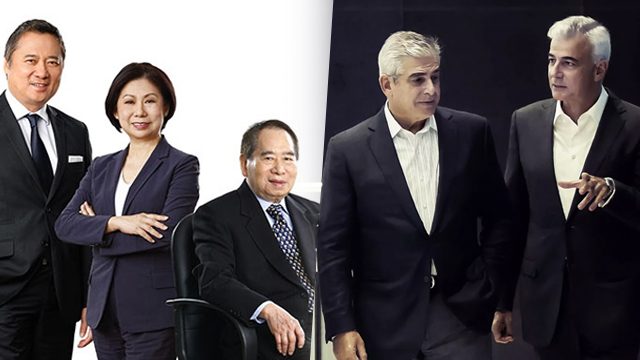 MANILA, Philippines – The Sy and Zobel de Ayala clans of the Philippines remained on Forbes magazine’s list of 50 richest families in Asia, while the Aboitizes are out.

The family of Henry Sy – who has been topping Forbes’ Philippines rich list for a decade now – jumped 11 notches in 2017, becoming the 9th richest clan in Asia.

With a net worth of $20.1 billion, the patriarch Sy took him almost 60 years to get to where he and his family are now. Sy started a small shoe store in Manila and built it into SM Prime Holdings Incorporated, the country’s largest mall developer.

“His 6 children are all involved in management, and his grandchildren also have active roles. Grandson Howard recently started his own venture, StorageMart, a self-storage company in Makati, Philippines,” Forbes wrote in an article announcing the release of the list on Wednesday, November 15. (READ: FAST FACTS: SM Investments Corporation)

The Zobel de Ayalas, with an estimated net worth of $6.13 billion, dropped 6 notches to 43rd on the billion-dollar clan list.

The 183-year-old Ayala Corporation, now run by the 7th generation of the family, started off as a small distillery and is now one of country’s largest and oldest conglomerates.

The diversified Ayala group serves as the holding company for publicly-traded Ayala Land, Bank of the Philippine Islands, Globe Telecom, and Manila Water.

Meanwhile, the Aboitizes of Cebu are now out of the Forbes‘ Asia’s richest families list. In 2016, the Aboitiz clan ranked 39th, with an estimated net worth of $4.95 billion.

Forbes said the 50 families on its Asia list are cumulatively worth a record $699 billion in 2017, up by almost $200 billion a year ago. The magazine added that for the 3rd time, India enjoys the biggest presence in the ranking with 18 families. – Rappler.com