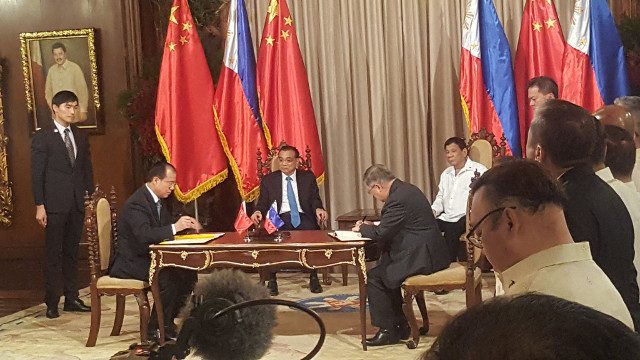 Facebook Twitter Copy URL
Copied
The Philippine government will be the issuer while the Bank of China will be the lead underwriter in a 1.2 billion RMB offering aimed at Chinese investors

MANILA, Philippines— The Philippines is set to attract more Chinese money after it  sealed a deal that paves the way for the its maiden offering of “Panda bonds.”

Panda bonds are bonds denominated in Chinese Yuan Renminbi (RMB) and sold in the Chinese market by a foreign issuer.

President Rodrigo Duterte and Chinese Premier Li Keqiang witnessed the signing of the agreement at the Palace Reception Hall after their bilateral meeting. Li had an official visit to the Philippines after he attended the 31st Association of Southeast Asian Nations Summit and Related Meetings in Manila.

In a statement on Friday, November 17,  the DOF explained that the Philippine government will be the issuer of the Panda bonds while BOC will be the lead underwriter for the planned 1.4 billlion RMB ($211 million) offering.

As lead underwriter, BOC has committed to form an underwriting team that will purchase the Panda bonds that the Philippine government will issue, and then resell it to the Chinese market for a profit.

The underwriting agreement also stated that the BOC will also serve as the bookrunner of the Panda bond issue.

Dominguez had previously said that the offering was tentatively planned for the 4th quarter of this year, depending on market conditions, the possible business risks, and the trend in dollar interest rates.

“We thank the BOC for taking the lead in helping us gain a foothold in the panda bond market,” Dominguez said at the ceremony,

“We also welcome the bank’s efforts in bringing the Philippines’ growth narrative to the Chinese investors as demonstrated in the last Philippine Economic Briefing in Shanghai, and look forward to a strengthened partnership,” he added.

National Treasurer Rosalia de Leon, for her part, said, “The Panda bond issue will diversify our funding sources and provide benchmarks for other Philippine issuers in the onshore market, particularly at this time that the renminbi is a reserve currency.”

“The bond issue will also complement the financial support from China for the implementation of critical infrastructure projects,” she added.

Along with the Panda Bond agreement, the DOF also signed other agreements including the financing cooperation agreement with Export-Import Bank of China for two of the Philippines’ infrastructure projects – the Kaliwa Dam-New Centennial Water Source of the Metropolitan Waterworks and Sewerage System (MWSS), and the Chico River Pump Irrigation facility of the National Irrigation Administration (NIA).

The DOF noted that the financing agreement will cover 85% of the total contract amounts of the projects. – Rappler.com