Facebook Twitter Copy URL
Copied
'Only the President can ask me to resign,' says Transportation Secretary Arthur Tugade, as he gives an assurance that the government will improve the MRT3

MANILA, Philippines – The case of a Metro Rail Transit Line 3 (MRT3) coach getting detached while the train was moving has prompted some lawmakers to urge Transportation Secretary Arthur Tugade to resign. But Tugade rejected this call and instead, ordered his department to implement an action plan to solve MRT3 woes.

“Only the President can ask me to resign. Not all problems can be addressed with resignation. I only serve at the pleasure of the President,” Tugade said on the sidelines of an event in Manila on Monday, November 20.

Two lawmakers earlier demanded Tugade’s resignation amid the string of glitches and accidents that have hounded the MRT3. (READ: MRT woes: How often do they happen?)

Pressed for time, Tugade did not divulge the action plan to solve MRT3 woes. But Transportation Undersecretary for Rail Cesar Chavez told Rappler also on Monday that this plan entails 3 steps.

Before 2017 ends, Chavez said the Department of Transportation (DOTr) will procure critical rehabilitation services for total rail replacement, a signaling system, and airconditioning units, among others. It will also undertake the general overhaul of 38 light rail vehicles.

“This is what I call the tactical, operational, and strategic direction of MRT3,” he said. (READ: Malacañang promises ‘better MRT’ during Duterte administration)

In 3 months’ time, there will also be a “technically and financially capable” maintenance service provider, Chavez added.

“Worst-case scenario is procurement of the maintenance service provider will take up to 6 months. If we succeed, [the concessionaire] will maintain [the MRT3] for two to 3 years, which may be absorbed by the group of Metro Pacific Investments Corporation (MPIC),” he said.

According to Chavez, the government will not wait for a new MRT3 private owner and operator for it to start the 1st two steps of the plan.

If everything goes according to plan, Chavez said MRT3 riders may expect a new railway operator by mid-2018.

The DOTr earlier granted the original proponent status to the MPIC group for the rehabilitation, operations, and maintenance of the MRT3. The unsolicited proposal is now up for review of the National Economic and Development Authority (NEDA).

For the department, the MPIC group’s unsolicited proposal is “expected to solve the historical fragmented approach” of running the MRT3.

Since 1999, the MRT3 has been owned by a private corporation, maintained by a different private concessionaire, and operated by the government, contributing to the system’s current condition.

“The proposal, once implemented, is expected to restore MRT3’s reliability and double its capacity in the medium- to long-term,” the DOTr said.

Railways are essential in Metro Manila, and ideally should be a much faster option than getting stuck along congested roads, but breakdowns have plagued the MRT3.

Last week, around 140 passengers were forced to walk on the MRT3 tracks as one of its coaches got detached from the train. This decoupling incident is just one of the many failures Filipinos have had to put up with.

Back in 2009, a short circuit caused a small fire at a southbound MRT3 train in Cubao. In 2014, about 8 passengers were hurt after a southbound train suddenly stopped at the Guadalupe Station. (READ: TIMELINE: MRT3 mishaps)

MRT3 rides during rush hour are also agonizing, as passengers deal with long lines and then end up packed in train coaches like sardines.

The MRT3 is owned by private firm Metro Rail Transit Corporation (MRTC) – a signatory to the build-lease-transfer (BLT) agreement for the MRT3 in 1997. But the  government has also long been involved in the train’s upkeep since it resumed the responsibility of securing a maintenance provider in 2012.

“The improper maintenance is solely attributable to the government. They grabbed responsibility for maintenance from the asset owner, when it kicked out Sumitomo Corporation in 2012. Under the BLT agreement, maintenance is the responsibility of MRTC,” Rene Santiago, a transportation expert and president of Bellwether Advisory Services, said in an interview.

Santiago said MRTC’s obligation was to make 22 trains operational until 2024, the end of the concession period. This “can only be fulfilled if MRTC has retained responsibility for upkeep.” 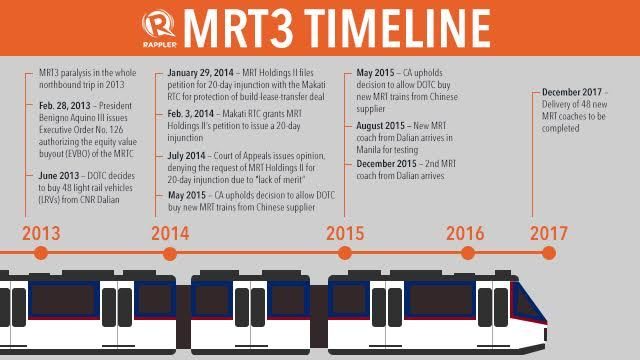 Santiago pointed out that the needed MRT3 rehabilitation was already recommended as early as 2009.

“The [DOTr] sat on these proposals from 2010 to 2013, preferring an erroneous strategy of equity buyout. The latter means appropriating over $1 billion, which would not add an iota of improvement to the system. The rehabilitation and doubling capacity could have been done for $300 million and completed before 2014,” he added.

While the ills of the MRT3 are the result of cumulative errors in policy and operational decisions made across administrations, the DOTr said finger-pointing will not solve the problem.

Instead, the transportation department assured the 500,000 daily riders of the MRT3 that it will deliver better service – which, as the years have shown, is easier said than done. – Rappler.com