Nov 28, 2017 7:18 AM PHT
Agence France-Presse
Facebook Twitter Copy URL
Copied
The sale of Time Inc. highlights the troubled state of print media and raises questions about the politics of the news industry in the Donald Trump era 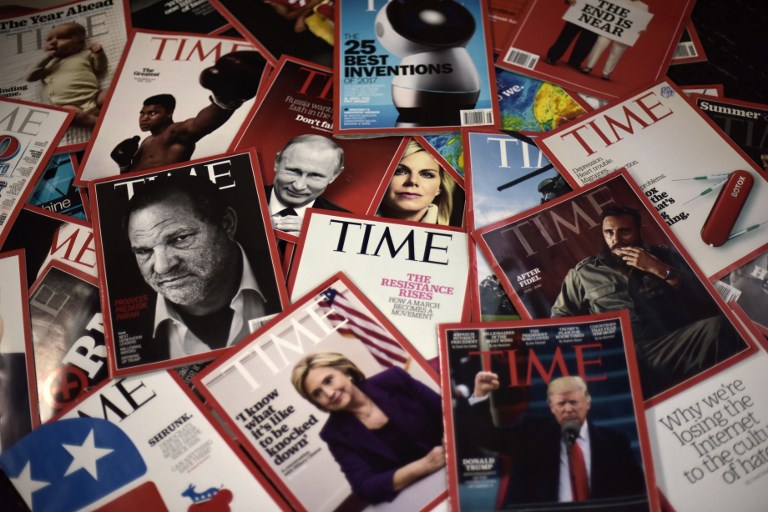 WASHINGTON DC, USA – The sale of Time Inc., home to some of the most storied American magazines, highlights the troubled state of print media and raises questions about the politics of the news industry in the Donald Trump era.

In a deal announced Sunday, November 26, Meredith Corp, publisher of Better Homes & Gardens and other titles, agreed to pay $2.8 billion for the owner of the renowned TIME Magazine and other well-known magazines including People, Fortune and Sports Illustrated.

The deal is backed by the billionaire brothers Charles and David Koch, known for supporting conservative causes and candidates, and largely antagonistic to the mainstream media.

The $650 million from the family’s Koch Equity Development (KED) was described as a “passive” investment, according to Meredith, which said the group would not have a board seat or any “influence on Meredith’s editorial or managerial operations.”

The backing from Koch has nonetheless raised concerns about wealthy conservatives bankrolling efforts to reorient media organizations away from what some view as a left-wing bias.

“Media is a crappy investment and if you’re going to take it on, you’re doing it for reasons other than fiduciary returns,” said Jeff Jarvis, a professor of new media at City University of New York and a former journalist with Time Inc.

“I’m not against more conservative investment in media,” Jarvis said, but he argued that the Kochs appear to be “more propagandistic than journalistic.”

Charles Alexander, a former TIME editor, wrote in a Nation essay last week of his concern that the Kochs have been aggressively funding climate change denial efforts, raising fears of an effort to stifle reporting in that area.

Alexander said the billionaires – whose businesses include energy, pipelines, cattle and paper industries – have “financed a campaign of disinformation designed to convince the public and politicians that climate change is nothing to worry about.”

Angelo Carusone, president of the left-leaning watchdog group Media Matters for America, said he doubts the claim that the Koch family will remain passive.

“I don’t buy that for a second,” Carusone said. “Why would they make this investment? They don’t respect journalism. They hate the news media.”

‘Person of the Year’?

Trump, meanwhile, has stepped up his war against what he calls “fake news” CNN, and last week claimed he turned down TIME Magazine’s “Person of the Year” award, despite denials from the publication.

“It will be interesting to see who is ‘Person of the Year’ next year,” said Rebecca Lieb, a media analyst with Kaleido Insights.

Lieb said Time Inc. “needed a bailout” but that it remains unclear the degree to which Meredith can help revive the magazines through synergies and cross-marketing deals.

“This is similar to the (Rupert) Murdoch deal for The Wall Street Journal, when he said the newspaper would not be influenced by his political views,” Lieb said.

“In fact he did install his proxies and the newspaper did shift its coverage significantly.”

Dan Kennedy, a Northeastern University journalism professor, said he will reserve judgment on the Kochs’ political motives, noting his experience with a Boston television station on which one of the brothers held a board seat and “knew how to act as a responsible board member.”

“The real shame of all this is that (media conglomerate) Time Warner chose to spin off Time Inc. (in 2014) and concentrate on the profitable aspects of its business and left the magazines on an iceberg to die,” Kennedy said.

Samir Husni, a University of Mississippi journalism professor who heads the school’s Magazine Innovation Center, said he does not see politics as a motive for the deal.

“This is similar to what happened with newspapers in the 1970s and 1980s,” Husni said. “The same consolidation is happening now in magazines.”

Husni said “there is still a lot of money to be made in magazines” for companies which can adapt their business models in both digital and print.

He added that the Kochs “are not dumb” and would not have made an investment without an expectation of a return.

As for Meredith, he said, “If you look at the history of the company and its service journalism I doubt they will allow any outside influence to challenge the integrity of the magazines.” – Rappler.com