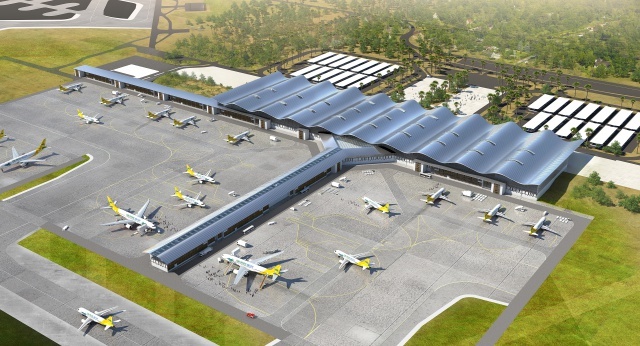 MANILA, Philippines (UPDATED) – The group of publicly-traded Megawide Construction Corporation and Bangalore-based GMR Infrastructure Limited bagged its 2nd airport project in the Philippines: the construction of a new terminal building for the Clark International Airport.

It was also the Megawide-GMR group which had bagged the country’s 1st airport public-private partnership (PPP) project, which was the expansion, operations, and maintenance of the Mactan-Cebu International Airport.

The Bases Conversion and Development Authority (BCDA) and the Department of Transportation (DOTr) on Tuesday, December 19, announced they have awarded the engineering, procurement, and construction (EPC) deal for the Clark airport to the Megawide group after it offered the “lowest calculated responsive bid.”

It was last December 14 when the Megawide-GMR group submitted the lowest financial proposal for the airport expansion project at P9.36 billion.

The new Clark airport terminal building will break ground on Wednesday, December 20, at the Clark Civil Aviation Complex in Pampanga. The new terminal will be able to accommodate an additional 8 million passengers yearly.

The BCDA is expected to bid out the operations and maintenance of the Clark International Airport to the private sector next year. (READ: Auction for new Clark airport terminal starts)

Aside from the Cebu airport deal, its other projects are the 1st phase of the PPP for School Infrastructure Project (PSIP), PSIP’s 2nd phase, the terminated Philippine Orthopedic Center modernization project, and the Integrated Transport System (ITS)-Southwest deal.

Meanwhile, Filinvest Development Corporation, JG Summit Holdings Incorporated, and Changi Airports International have teamed up for an P839-billion proposal to develop, operate, and maintain the Clark International Airport. This, however, does not include the construction of a 2nd terminal building there.

Instead, it includes the operations and maintenance of the existing and new terminals under a joint venture with the BCDA.

The new proposal also includes plans to build future capacity augmentation and expand airport facilities including terminals and runways, among others.

The BCDA has neither accepted nor rejected the proposal yet. The Filinvest-JG Summit-Changi consortium was not part of the 7 groups that had participated in the auction of the new Clark airport terminal. – Rappler.com