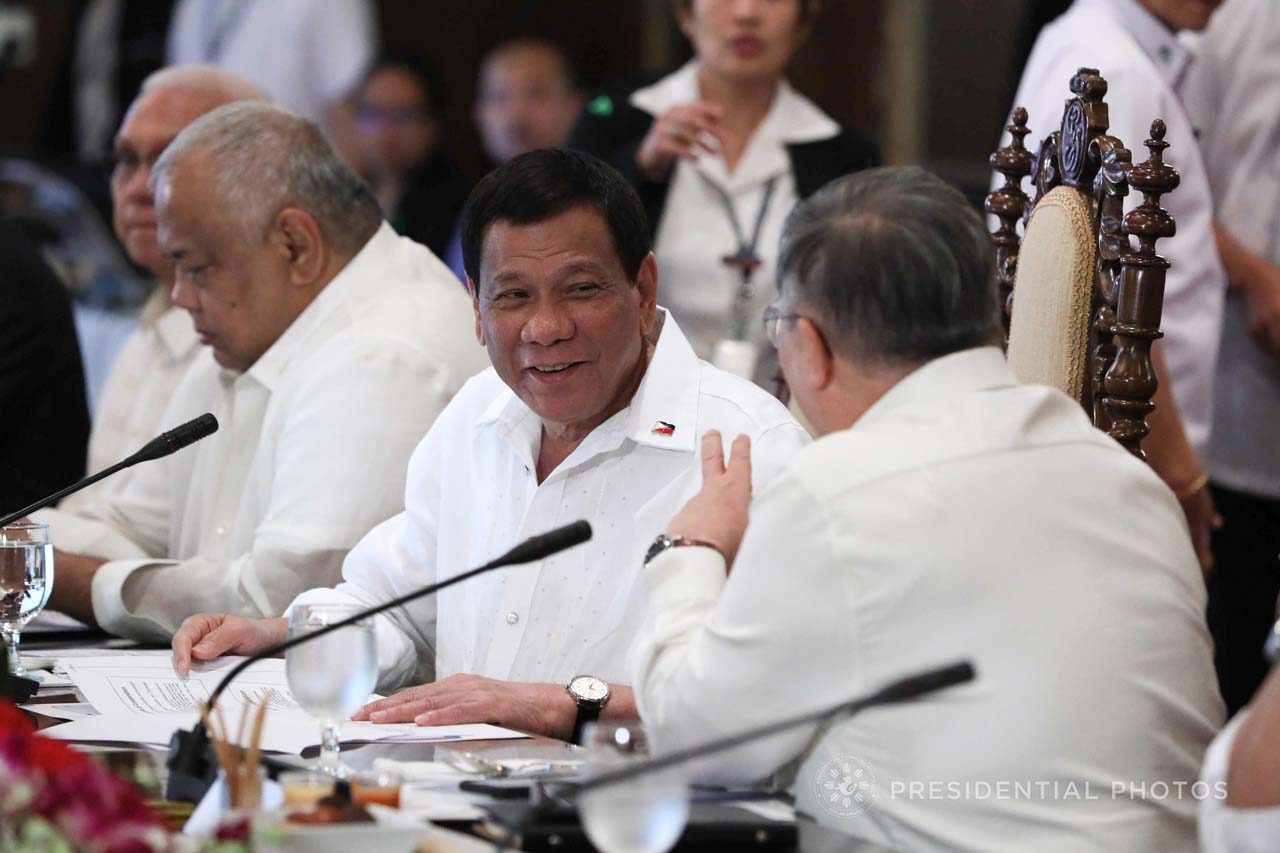 Facebook Twitter Copy URL
Copied
The vetoes will help the first package of tax reforms expected to reach the target P90 billion in revenue in 2018, according to the Department of Finance

MANILA, Philippines—President Rodrigo Duterte has vetoed some parts of the first package of the Tax Reform for Acceleration and Inclusion (Train) law, Malacañang Palace informed Congress on Friday, December 22.

The tax reform measures, which the President signed into law last Tuesday, will take effect on January 1, 2018.

The line items from the bill the President vetoed deal with:

Specifically, the veto was on the special 15% tax rate on gross income of employees under the category.

The President said that, “given the significant reduction in the personal income tax, the employees of these firms should follow the regular rates applicable to other taxpayers.”

2. Zero rating of sales of goods and services to separate customs territory and tourism enterprise zones

The veto deals with areas under the Tourism Infrastructure Enterprise Zone Authority (Tieza).

The President said the provisions go against the principle of limiting the VAT zero rating to direct exporters.

He also noted, “At any rate the Tieza law, which is still in effect for two years, can still be used to avail of the above-mentioned incentives.”

3. Exemption  from percentage tax of gross sales/receipts not exceeding P500,000

The veto deals specifically with all self-employed professionals with the above income.

The President said that “the exemption will result in unnecessary erosion of revenues and will lead to abuse and leakages.”

He also noted that the taxpayers covered by this provision are already exempted from VAT, thus the lower 3% on gross sales or receipts is considered as their share in contributing to the revenue base of the country.”

The President said this “ provision runs the risk of being too general, covering all types of petroleum products, which may be subject to abuse [by] taxpayers and thus lead to massive revenue erosion.”

The President noted that this revision effectively amends the Sin Tax Law, which provides for funds for universal health care and will effectively diminish the healthcare sectors revenue base.

“With the vetoes we estimate that the revenue from Train will go up to close to P90 billion,” said Finance Secretary Carlos Dominguez following the 171st meeting of the Development Budget Coordination Committee (DBCC) on Friday.

“But that P90 billion is only for Part A of Train’s initial package, with Part B expected to raise another P38 billion to P40 billion, and we expect that to be passed by Congress by the first quarter of 2018,” he said.

The finance secretary also said the 2nd package of tax reforms, which will deal with corporate tax reforms, will be submitted to Congress by January 15.

The vetoes, he added, will not affect the date of effectivity of the new tax law, which is still set for January 1, 2018.

The initial package of the Train Law was originally estimated to raise P167 billion to be used for infrastructure build-up, and the lower revenue means that the government will borrow more for 2018.

Dominguez noted, however, that the additional borrowing would not be a burden given stellar economic growth.

“What you look at is borrowing in relation to GDP growth. Our expectation is that the percentage of borrowing will go down as a percentage of GDP as we go forward so we’re very safe,” he explained.

The DBCC retained its 3% deficit ceiling, noting that the financing mix will continue to favor domestic barrowing over the medium term. For 2018, however, the government is expected to borrow 74%  from local sources with 26% coming from foreign sources.

Despite the lower than expected revenue from Train, the DBCC did not make any major changes to its medium-term economic plan.

The government’s economic managers also retained GDP target growth of between 7-8% through 2022. – Rappler.com