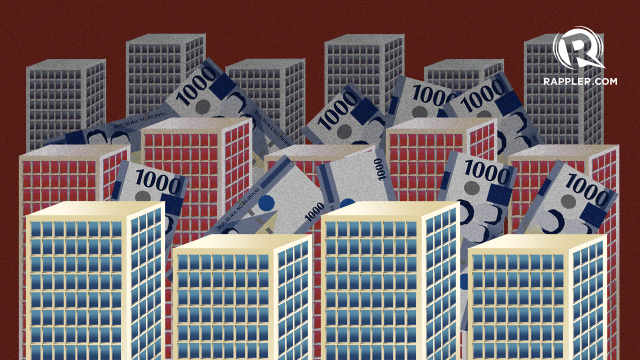 Data from the Bangko Sentral ng Pilipinas (BSP) showed gross non-performing loans of universal and commercial banks amounted to P107.69 billion in October this year – which was P9.27 billion higher than the P98.42 billion recorded in the same month in 2016.

Non-performing loans are left unpaid by borrowers for at least 30 days past the due date. These are seen as risky assets due to higher risk of default.

Amid the uptick in bad loans, BSP said the rate remains manageable across economic sectors, such as financial and insurance activities, real estate, manufacturing, wholesale and retail trade, as well as electricity, gas, steam and air-conditioning supply.

The rise in bad loans happened as total loan portfolio of big banks grew at a faster rate of 17% to P7.36 trillion in October, from P6.29 trillion in the same month last year.

This translated to a lower gross non-performing loan ratio of 1.46% in October, from a year-ago level of 1.56%, BSP data showed. (READ: The hanging fate of OFWs buried in debt)

Aside from trying to keep bad loan levels low, BSP said big banks continued to earmark sizeable reserves for potential credit losses, which was at P144.94 billion or 1.97% of total portfolio in October this year. This is compared to last year’s P133.05 billion or 2.11% of the total lending portfolio.

Latest data from the BSP showed the industry’s credit growth eased to 19.9% in October, from 21.1% in September after increasing for 4 consecutive months – which some economists and credit rating agencies see as a possible sign of an overheating economy.

Meanwhile, credit to the real estate sector accounted for 17.2% of the total loan portfolio at P1.17 trillion, followed by credit to wholesale and retail trade and repair of motor vehicles at 13.6%, worth P924.56 billion.

This was followed by manufacturing sector loans (12.8% of loan portfolio, worth P873.64 billion), and credit to electricity, gas, steam and airconditioning supply sector (12.1% share, P821.87 billion).

The Philippines has posted positive economic growth for 75 straight quarters since the Asian Financial Crisis. – Rappler.com