Facebook Twitter Copy URL
Copied
(2nd UPDATE) For the 4th quarter of 2017 alone, the Philippine economy grows by 6.6%. Its 2017 growth places it 3rd in Asia behind China and Vietnam.

MANILA, Philippines (2nd UPDATE) – A recovered agriculture sector, strong government consumption, as well as better exports and imports made it possible for the Philippine economy to grow above 6% for the 6th straight year in 2017.

This was despite a drop in private construction spending, post-election impact, and a plateuing business process outsourcing (BPO) industry.

National Statistician Lisa Grace Bersales on Tuesday, January 23 announced that the gross domestic product (GDP) grew 6.7% in 2017, slightly below the 6.9% growth recorded in 2016.

This, however, still placed the Philippines among the fastest-growing economies in Asia, after China’s 6.9% and Vietnam’s 6.8%.

During the last quarter of 2017, the Philippine economy grew by 6.6%, slightly below the 6.7% median forecast in Bloomberg’s poll.

“You can see that our decline is really very moderate. To me, this is a good performance, given the fact that it is already normal for post-election years to witness a decline in economic growth,” Socioeconomic Planning Secretary Ernesto Pernia said in a press conference in Pasig City.

Pernia, also the director general of National Economic and Development Authority (NEDA), said GDP growth in the 4th quarter was backed by growth of 14.3% in government consumption, a “robust” hike, from a mere 4.5% in the same period in 2016.

“That was really the main driver, public spending. This is very much in line with the government’s commitment to timely delivery of public services and social protection programs, including assistance to victims of typhoons as well as in the Marawi conflict, public scholarship programs, and health expenditure programs,” Pernia said in the briefing.

“While we remain optimistic about the growth of the agriculture sector, based on generally positive outlook of rice and corn production in the first quarter of 2018, we should be aggressive in pursuing reforms in the sector.  High up on the list is the lifting of the QRs or the quantitative restrictions on rice imports,” the NEDA chief said.

On the expenditure side, external demand improved with growth in exports of goods bouncing back to 20.2% in the 4th quarter, from 17.2% in the 3rd quarter.

This helped to offset the services exports sector’s slowdown of 12.6% in the 4th quarter, from 19.9% in the 3rd quarter.

Pernia said a major contributing factor to this decline was miscellaneous services, which includes the BPO industry.

“We can take this as an indication that the current market profile of the BPO sector is ripe to move into higher value-added services,” he explained.

“It’s still growing, it’s still not contracting. BPO growth is still positive, but we are seeing that it is plateuing. It has already reached some steady state,” NEDA Undersecretary Rosemarie Edillon said.

“The way for it to grow much much more is for it to diversify into higher value-added services,” Edillon added.

Another letdown in the last quarter was the construction industry, which grew slower at 2.8%, from 10.7% recorded in the same period a year ago, weighed down by the drop in private construction spending.

The NEDA chief linked the decline in private construction spending, which accounts for 74.9% of total construction investments, to the onset of the holiday season. 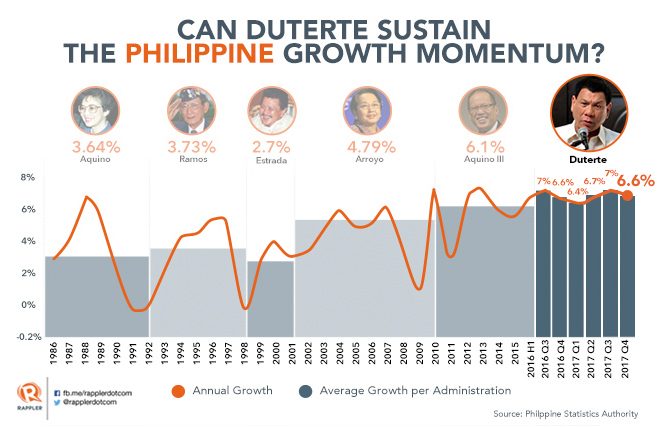 The country’s economy had started 2017 sluggishly due to the slow implementation of big-ticket infrastructure projects, which gradually began to pick up in the 2nd quarter.

The effect of more government spending as well as a recovering agriculture sector also contributed to better-than-expected 3rd quarter growth, which was recently revised upwards to 7%.

For 2018, the World Bank and the Asian Development Bank (ADB) both expect the Philippines to remain as one of the fastest-growing economies in the region, with forecasts of 6.7% and 6.8% growth, respectively.

The government’s own target range for this year is higher than last year’s at between 7% and 8% growth. The Duterte administration is banking on its ambitious infrastructure program and the newly implemented tax reform law.

“As I said last year, there will be a more exciting growth narrative for the Philippines this 2018, more so now that all of the government’s plans to keep the country among the world’s fastest-growing economies have started falling into place,” said Finance Secretary Carlos Dominguez III in a statement.

BSP Governor Nestor Espenilla Jr said the GDP growth in the 4th quarter last year and in 2017 confirmed the underlying strength of the economy that rests on increasingly balanced foundation.