Facebook Twitter Copy URL
Copied
The Department of Information and Communication Technology (DICT) has a tall order from the Philippine president: Launch a major 3rd telecom player by March 2018. Prospective entrants think the timeline is too short.

MANILA, Philippines – The anticipation over the launch of the country’s 3rd major telecom player in two months’ time might turn out to be a letdown, after prospective entrants sought for more time to prepare the requirements for the auction and secure partners.

Heeding the call of frustrated customers, President Rodrigo Duterte last month ordered the Department of Information and Communication Technology (DICT) to ensure that the 3rd major player would be “up and about” by March this year.

DICT acting chief Eliseo Rio Jr then announced plans of conducting a “reverse bidding,” where it will grant a provisional authority and award the available 3G and 4G frequencies to the winning concessionaire. The proposed criterion is “highest 5-year financial roll-out plan” of ICT services that will make use of available frequencies.

But because of prospective entrants’ call for more time, Rio said he will talk to the President to extend the deadline to May this year, from March.

Pressed for time, Rio has been actively seeking opinion from stakeholders on ways to entice and choose the rightful 3rd player that will challenge giants PLDT Incorporated and Globe Telecom Incorporated.

The two listed telco giants have been dominating the telecom industry since 2011, when Manuel Pangilinan-led PLDT bought the firm operating Sun Cellular. In 2016, PLDT and Globe bought for P69.1 billion the telecommunication assets of San Miguel Corporation – the firm which was supposed to launch a 3rd major player that year.

In over a decade, brands, logos, and services offered have changed, but the fact remains that the two giants are the gatekeepers to the industry, locking 80% of the total available and allocatable spectrum, inclusive of guard bands, according to the National Radio Frequency Allocation Table (NRFAT).

While he’s not out to destroy the incumbents, Duterte, as early as 2016, made public remarks of opening up the industry to foreign companies.

Since then, several firms vying to be the 3rd player have been making noise.

There is Philippine Telegraph & Telephone Corporation (PT&T) – led by a group of Lucio Tan Jr, Salvador Zamora II, and Benjamin Bitanga – which has been actively searching for “financial and strategic investors” to regain its status as a major telecommunications force in the country.

State-run National Transmission Corporation (TransCo) had also expressed intention to utilize its assets as the backbone for a 3rd telecommunications company. 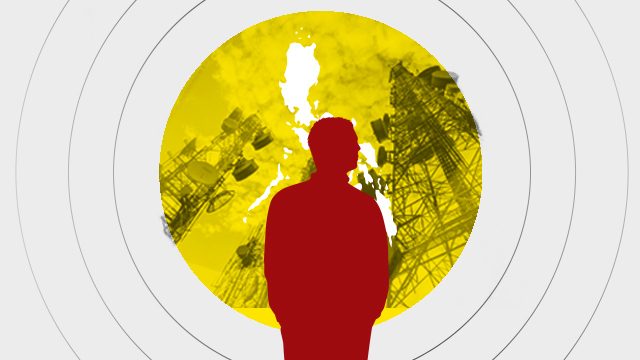 Now Corporation of Mel Velarde has also been asking the National Telecommunications Commission (NTC) to reallocate mobile frequency to the company to be able to compete with the two telco giants.

Converge ICT Solutions Incorporated has also set its sights on the re-allocation of the returned frequencies to the NTC.

Amid the noise, launching a 3rd telco player in two months’ time will unlikely be achieved, prospective entrants and independent researchers agreed.

Mary Grace Mirandilla-Santos, an independent researcher and lead convenor of advocacy group Better Broadband Alliance, said it “would take years” to set up a telco company.

“Completing the technical, legal, and corporate requirements of putting up a full-service telco – offering voice, SMS, and data – operating nationwide will take years,” Mirandilla-Santos told Rappler in an e-mail.

Although naming an entrant is “doable” by March, Pierre Galla, co-founder of Democracy.Net.PH, said “expectations should be managed as to whether or not the third player shall already be offering services to the public.”

For Galla, the highest barrier to entry – assuming the foreign ownership issue is hurdled – is the requirement of the entity to secure a legislative franchise.

“It appears that it takes about 3 to 5 years to secure a legislative franchise, but given the fact that both houses of Congress are dominated by the President’s allies, such a requirement may not take too long,” he added.

This was echoed by Mirandilla-Santos, who said a full-service telco company would need about 5 years to secure licenses to operate a particular service.

“[It would need] congressional franchise (two to 5 years), NTC provision authority (one to 5 years) and value added service registration (15 to 30 days) [to be authorized] to operate a particular service,” she added.

For network rollout, an entrant would also need to secure an NTC permit to import equipment and local government unit permits, among others, said Mirandilla-Santos.

“This is apart from the corporate and legal requirements that an acquisition or a joint venture would entail, which would usually take at least one year,” she added.

A representative of G Telecoms Incorporated said the 1st quarter 2018 deadline of Duterte is “too short.”

“Timeline is too short. We are talking about P300 billion investment. We have to identify shareholders, so maybe you can tell the President the timeline is too short. They are not giving us enough time,” the representative said during a public consultation in Quezon City on Wednesday, January 24.

“Do you guys realistically believe that you can do the evaluation process by March?” Solis asked NTC and DICT officials during the public consultation.

For Miguel Bitanga, chief operating officer and treasurer of PT&T, his firm is ready to present its rollout plan within the government timeline. (READ: PT&T looks to become major telco force in 3 years)

“It is achievable. We have fiber optic cable and we are operational. We have a rollout plan on fixed broadband expansion that we can implement in major metropolitan cities in less than a year,” he said in a phone interview.

Bitanga said PT&T is in talks with several foreign firms for financial and operational assistance. One of these is China Telecom.

“We have been talking with them. Just because we are talking to this specific company doesn’t mean we’ll be closing our doors to others. We plan to have multiple partners – tech advisors, financial partner, strategic partner,” Bitanga said,

He added that PT&T plans to enter into mobile broadband in a year’s time.

“In a year, should we be granted the frequencies, we can launch services in big metropolitan areas from north to south. Depending on how things go, fund raising will be easy. We have the capital structure to able to accommodate it. As a public company, we can go to public markets and raise money,” Bitanga said.

Bitanga is a co-owner of Dolphin Fire Group, an investment house owned by Menlo Capital Corporation. Dolphin Fire has a stake in Rappler.

Rio said the telco entrant should be able to spend at least P60 billion a year to provide competitive ICT services.

Prospective entrants are now forming consortia with local and foreign firms to vie for the 3rd telco opening. – Rappler.com