TV5 expects to cut losses by half in 2018 amid ESPN deal, restructuring 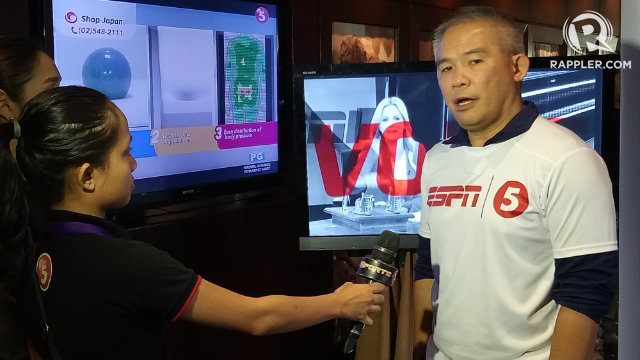 MANILA, Philiippines – Broadcast firm TV5 Network Incorporated expects to cut losses by 50% in 2018, mainly on the back of its continuous restructuring program and a new partnership with global sports broadcaster ESPN. This, in turn, is seen to help TV5 finally break even in 2019.

The country’s 3rd largest media network had originally targeted to break even in 2013. It was then pushed back to 2017 and then 2019.

When Vincent “Chot” Reyes replaced Lorenzana, TV5 shifted its focus to sports and news programs in a bid to finally be in the black.

“We had a very good 2017. Our business improved by [cutting losses by] 43% in 2017, from 2016….If we go on the same kind of phase, then I think we will be able to achieve our target. Our partnership with ESPN enhances our ability to break even in 2019,” Reyes said in a roundtable interview in Makati City on Monday, January 29.

Last October, Reyes had announced that ESPN 5 will replace Sports 5, starting with the PBA Finals Game 1 between the Barangay Ginebra San Miguel and Meralco Bolts that month.

Since the announcement, the TV5 chief said his network has seen significant improvement in its bottomline.

“There were 24 million page views in ESPN in December 2016. In 2017, that number jumped to 30 million views for the month of December. That’s still ESPN, not yet ESPN 5, not localized yet. We just announced it in October last year in the Philippines, and that already jumped. So the traffic is going to give us opportunity to monetize and generate revenue,” Reyes said.

“When we started showing NFL (National Football League) on TV5, the traffic in ESPN grew by 37%….It’s not just TV but it’s online, on your mobiles, desktops, that’s the kind of business model that we’re looking at for TV5,” he added.

It was in 2009 when the PLDT group, through its unit MediaQuest Corporation, acquired ABC Development Corporation, the operator of TV5 in 2009. MediaQuest bought TV5 from the Cojuangco group for P4 billion, and acquired MPB Primedia of Malaysia, the network’s major block-timer, for $16 million.

To cut expenses, TV5 terminated its partnership with Viva Communications, which handled the network’s entertainment programs.

Reyes said restructuring is an ongoing concern for TV5, like most companies, as its business model evolves.

“It’s not something peculiar. The reason it is an ongoing concern is because our business model keeps on evolving. By that alone, definitely there will be more changes,” Reyes said.

The network’s online news portal, InterAksyon, is also set to close down in March “to consolidate all brands under News5.com.ph.”

“We’re approaching it really from a 360-degree perspective, not only in our content but even the way we monetize the content. If before we had an ad sales group that is focused on selling TV ads, now it’s 360 [degrees], even digital as well, online, are all part of that package,” Reyes said. – Rappler.com