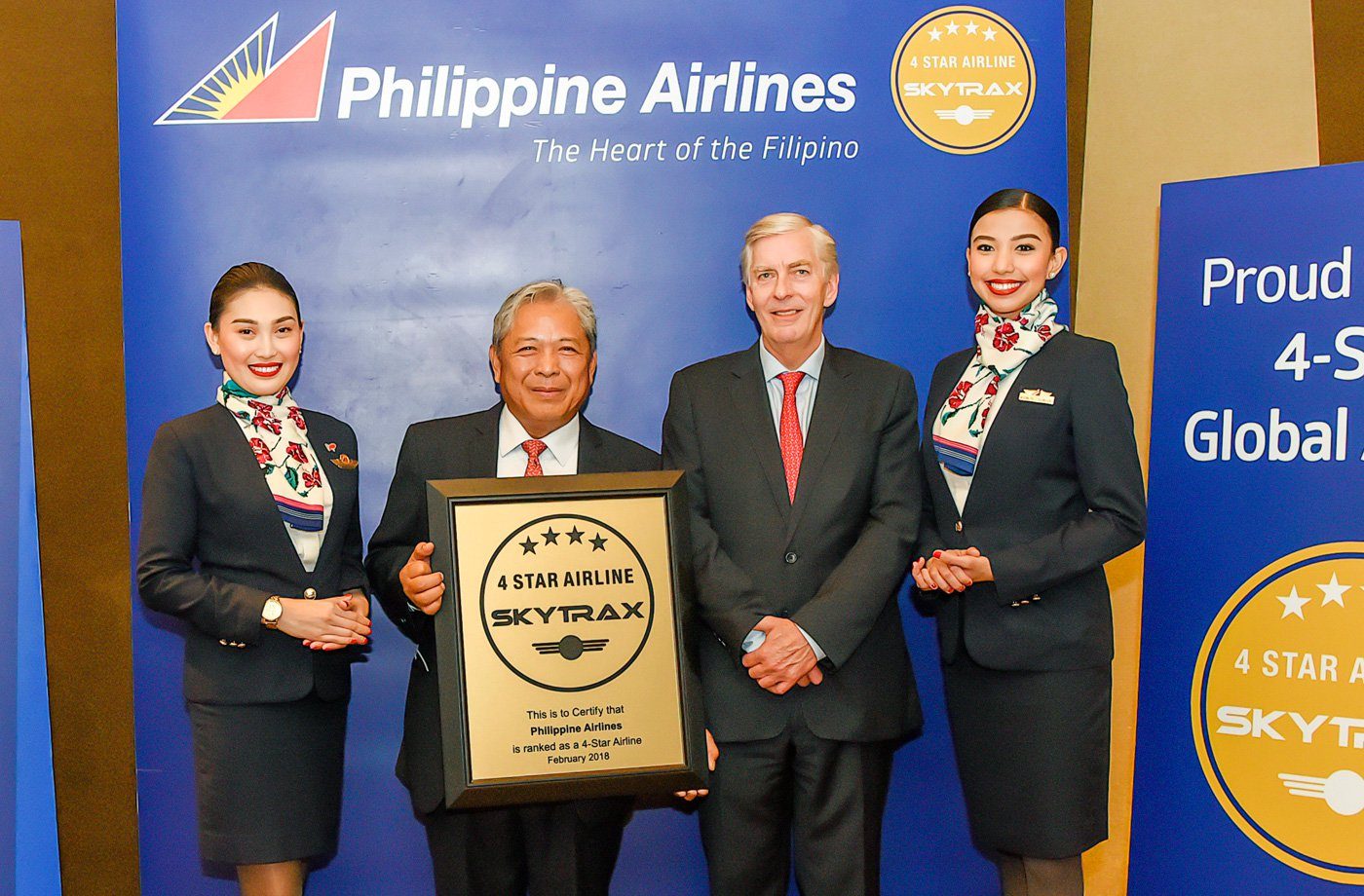 Facebook Twitter Copy URL
Copied
The Philippine flag carrier earns the rating upgrade from London-based Skytrax after an extensive audit of its in-flight and on-ground services. It joins 40 other airlines on the list.

International air transport rating organization Skytrax certified PAL as a 4-star airline, after it conducted an audit of the airline’s in-flight and on-ground service and noted major enhancements to its end-to-end passenger experience, PAL announced on Thursday, February 8.

“This is a big win for the Philippines. We are elated by this recognition which is a victory for the more than 7,000 members of the Philippine Airlines family. Our achievement is the country’s achievement and we share this with all Filipinos around the globe,” said PAL chairman and CEO Lucio Tan.

The airline, which joins 40 other airlines in th category, is the first Philippine airline to receive the 4 star rating from  London-based Skytrax, which audits airport and airlines, and ranks airlines worldwide for staff service standards and product quality.

The Skytrax Certified Airline Star Ratings, awarded since 1999, are internationally recognized as a global benchmark of airline standards.

“This recognizes the great improvements that [PAL] has introduced over the last two years, both in terms of product change and development and enhancement of the front-line staff service,” said Skytrax CEO Edward Plaisted.

“New and retrofitted aircraft have played an important part in the quality improvement process, and this looks set to develop further when PAL introduces the A350 into their fleet,” Plaisted added.

In June 2017, PAL placed sixth on the list of the World’s Most Improved Airlines, and was ranked by Skytrax as 67th out of 320 airlines, reflecting a 16-notch increase in rankings from  2016.

“The rating upgrade is a key result of a multi-year top-to-bottom end-to-end enhancement of the Philippine flag carrier. Our ‘Get That Star’ journey began in 2016. Our efforts over the last two years have borne fruit,” said PAL president and COO Jaime Bautista.

From 2016 up to the present, PAL finalized fleet orders of Airbus A350s, A321s, Boeing 777s, and Bombardier Q400 Next Generation planes bringing its fleet count to 88 aircraft, the largest fleet in the country.

PAL also developed new domestic hubs in Clark, Cebu, and Davao, and introduced new international routes from Clark to Seoul, South Korea, and Cebu to Bangkok, Thailand, and Chengdu and Beijing in China, among routes.

For the in-flight experience, the airline added myPAL eSuite personal TV service that gives passengers access to a wide selection of movies, music, and TV shows; and also myPAL Player which provides in-flight entertainment using passengers’ own devices, as well as in-flight Wi-Fi.

The airline said that its next step is to open a new two-level, 1,250-square-meter International Mabuhay Lounge at NAIA Terminal 2 for members of its frequent flyer program and business passengers by the second quarter of 2018.

PAL also said it plans to launch new routes, including non-stop services to New York and Brisbane, and flights to India and additional routes to Japan and China in 2018. – Rappler.com