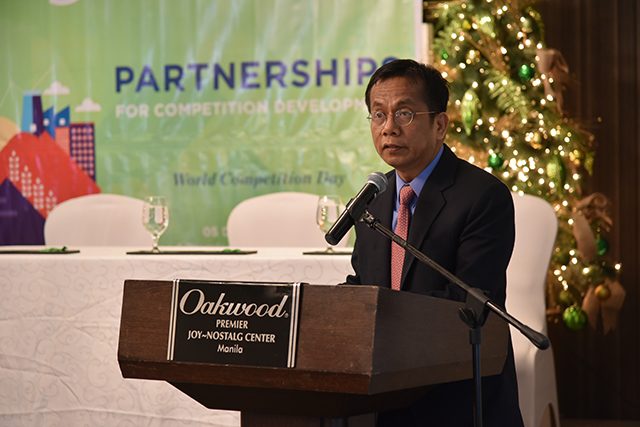 “We are still studying it. There’s a group that’s looking into it and hopefully within the 1st half of the year, we should be able to do it,” PCC Chairman Arsenio Balisacan said on the sidelines of a forum in Makati City on Wednesday, February 21.

Under Republic Act (RA) No. 10667 or the Philippine Competition Act, the antitrust regulator should be notified for M&A deals with transaction values above P1 billion, before the transaction is sealed.

“That threshold has been around for some time, and you know, the economy’s growing very fast and inflation has not been zero so you have to take account of the changing structure of the economy, as well as the rate of growth, inflation,” Balisacan told reporters.

“In the US, it’s automatic almost every year they adjust on the basis of inflation. We would want to have some automaticity in that, in the thresholds,” he added.

According to PCC Legal Office chief Giancarlo Camacho, the potential adjustment of the threshold was “raised during a recent legislative hearing.”

Back in February 2017, the PCC concluded there is “no pressing need” to raise the P1-billion threshold after a preliminary review.

This was after the agency received comments that its threshold is low and could hamper M&A deals in the country.

The PCC in 2017 said it conducted the review to assess whether the P1-billion threshold is too low. (READ: PCC: Make policy changes to open telco, energy markets)

The agency said its 2017 review showed that the Philippines’ threshold is similar to those in economies of comparable size, like Colombia and South Africa.

But with inflation accelerating to its fastest rate in 3 years last January, Balisacan said there is a need again to review the threshold.

Since the PCC’s establishment, it has received 135 transactions, 41 of which were global mergers.

The review of two transactions led to voluntary commitments on the part of the notifying entities, allowing the PCC to assess these commitments and carry out its adjudication function for the first time.