PAMPANGA, Philippines – Earlier charted proposals of Metro Pacific Tollways Corporation (MPTC) to build new expressways will have to wait until it gets a better picture of how delays in toll hikes will be resolved.

“If the situation continues not to be resolved, then obviously, we will be forced to at least [slow] down on the projects that have not yet started. That is why we are hoping we will have some clarity on the toll rate,” Rodrigo Franco, president and chief executive officer of MPTC and NLEX Corporation, told reporters on Monday, February 26.

MPTC units Manila North Tollways Corporation and Cavite Infrastructure Corporation have been foregoing a total of roughly P7.5 billion in potential revenues since 2012, Franco said on the sidelines of a ceremonial launch in Pampanga.

Back in August 2017, the Manuel Pangilinan-led tollway firm proposed to construct two new expressways worth P122.43 billion that would connect the existing North Luzon Expressway (NLEX) and Manila-Cavite Expressway (Cavitex).

MPCALA Holdings Incorporated and MPTC are also expecting to bag the original proponent status for the development of the 49-kilometer Cavite-Tagaytay-Batangas Expressway (CTBEX) by the end of February. This proposal costs about P25 billion.

“Anyway, those projects will go through the process and we needed some clarity on toll rate issues. It’s difficult to make additional investments if we don’t have clarity on what is happening on the toll rates,” Franco said. 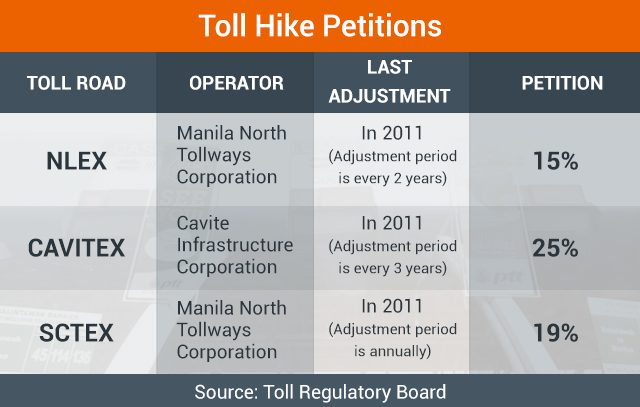 Sought for comment, Alberto Suansing, consultant of the Toll Regulatory Board (TRB), said the petitions for toll hikes are still being discussed by the Department of Finance (DOF) and the National Economic and Development Authority (NEDA).

“It is a sensitive issue. During the last administration, they were not granted any increase, so they are seeking them right now,” Suansing told reporters during the launch of the new SCTEX Mabiga Interchange and NLEX Sta Ines-Magalang Exit.

The TRB consultant said his office has proposed a gradual increase in toll fees for two years, to cushion the impact on motorists.

“What we are [taking into consideration] is the motoring public, but we don’t want to make the government look as if we don’t honor contracts. So, we have to marry both. Nothing’s final yet,” Suansing told reporters. – Rappler.com