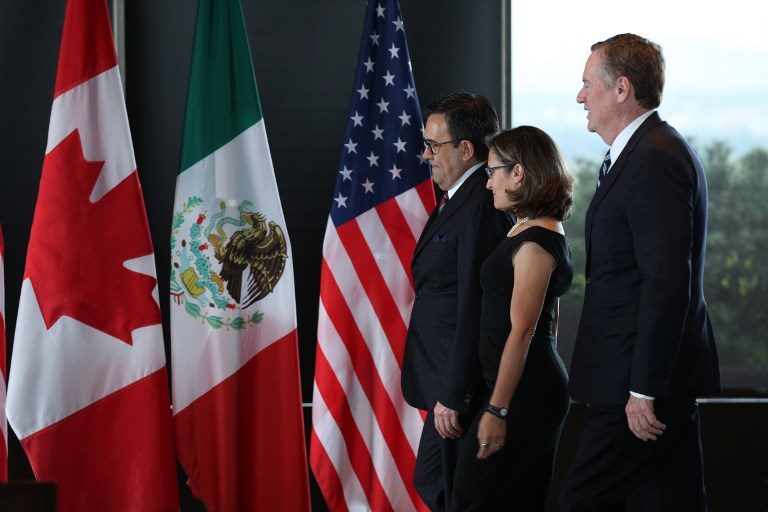 Facebook Twitter Copy URL
Copied
'We would have to target our response at the things they export that are most politically sensitive and hit exactly those goods. We have the ability to respond,' says Economy Minister Ildefonso Guajardo

MEXICO CITY, Mexico – Mexico threatened Tuesday, March 6, to retaliate against President Donald Trump’s planned steel and aluminum tariffs by hitting the most “politically sensitive” US exports with tariffs of its own, the latest signal of a brewing trade war.

Speaking a day after Trump shot down Mexican and Canadian proposals that the neighboring nations be granted an exemption from the steep US tariffs, Economy Minister Ildefonso Guajardo said Mexico was prepared to fight back.

“We would have to target our response at the things they export that are most politically sensitive and hit exactly those goods. We have the ability to respond,” he told Mexican broadcaster Televisa.

He said the Mexican government was currently analyzing which US exports it would tax.

“We won’t be making that public until we see exactly what (the Americans) are going to do,” he said.

A top Mexican strategist said such tariffs could target exports from states that voted for Trump in 2016, and which he would need to win to secure re-election in 2020.

“We can say to a given governor, this company exports 90% of its production to Mexico, and it’s going to be affected,” he told Televisa.

The escalating row comes as Canada, Mexico and the United States renegotiate the North American Free Trade Agreement (NAFTA) that has linked their economies since 1994, and which Trump has called the worst deal his country has ever signed.

On Monday, March 5, Trump moved to hold the trade talks hostage to the tariffs, tweeting: “Tariffs on Steel and Aluminum will only come off if new & fair NAFTA agreement is signed.”

US Treasury Secretary Steven Mnuchin sought to clarify the administration’s stance in testimony before a congressional committee.

With Canada and Mexico, “our objective is to have a new NAFTA and once we do that – which I’m cautiously optimistic on – the tariffs won’t apply to them,” he said.

However, with the tariffs due out this week and the latest round of NAFTA talks ending Monday with no agreement imminent, the two countries will face tariffs on their metals exports at least for some time.

Trump sparked global outrage last week by announcing he would impose tariffs of 25% on all imported steel and 10% on aluminum to protect domestic industries, citing a rarely invoked national security section of US trade law.

Canada, the top source of steel to the US market, has already vowed to take “appropriate, responsive measures” if the Trump administration goes ahead with the tariffs.

The European Union has threatened to hit big-name US brands such as Harley Davidson motorbikes, Levi’s jeans and bourbon whiskey with import duties.

That prompted Trump to fire back a threat to tax cars from the EU, further fueling fears of a full-on transatlantic trade war erupting.

Trump is also facing pushback on the issue from within his own Republican Party.

House Speaker Paul Ryan said the Trump administration could have been “smarter” in how it went about protecting US steelmakers, imposing “more surgical, more targeted” tariffs on countries like China that are accused of dumping.

Trump has defiantly hit back at global critics, saying trade wars are “good, and easy to win.” – Rappler.com