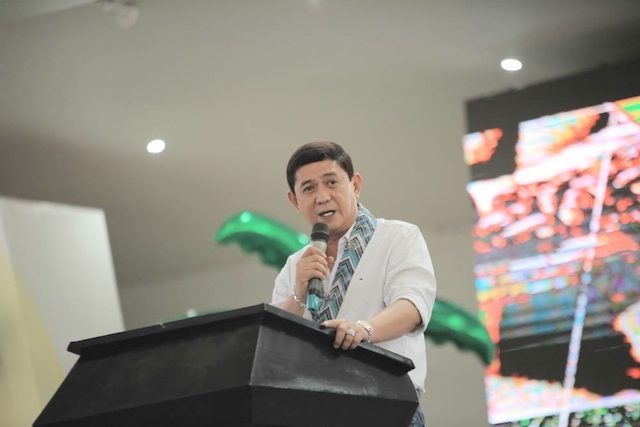 Facebook Twitter Copy URL
Copied
The MOU is for the construction of an industrial park in Banaybanay town which will feature a 1,200-megawatt liquified natural gas combined cycle power plant, among other facilities

DAVAO CITY, Philippines – Davao Oriental has signed a memorandum of understanding (MOU) with a Hong Kong-based foreign firm for a $27-billion industrial park that a neighboring province thumbed down last year.

“Hopefully with this investment in Davao Oriental, it will have an impact especially on employment,” said Dayanghirang.

Under the MOU, a 1,500- hectare industrial park will be constructed in Banaybanay, a Davao Oriental municipality facing the Davao Gulf, making it ideal for the project. Part of the plan is to establish an international port for cargo vessels.

The MOU was signed after the Davao Oriental provincial council passed a resolution authorizing the governor to enter into an agreement with Pionaire.

Pionaire’s partners were at the event, among them the Mettalurgical China Corporation, Shandong Electric Consulting Institute, China Petroleum and Chemical Corporation, and Dezhou Chemtics Chemical Company Limited, which gave presentations about the project on the same day.

“We’re looking [at] 10,000 jobs for Davao Oriental and for [other] provinces,” Libago said at a press briefing before the event.

The project by far the biggest investment in Davao Oriental, which opened its arms to the project after Davao Occidental terminated its agreement with Pionaire and blacklisted the firm from doing operating in the province last year.

In October 2017, the Davao Occidental  provincial government terminated its MOU with Pionaire on the same project after it discovered that the firm was reportedly asking for an accreditation fee of around $4,000 from prospect contractors. Pionaire denied the accusation and said the MOU was terminated because of “land use issues.”

Pionaire was also entangled in controversy in 2016, when PNOC Exploration Corporation (PNOC-EC) officials were accused of implementing an alleged “highly anoumalous” petroleum trading contract with the firm, despite a 2015 order by then Executive Secretary Paquito Ochoa Jr to hold in abeyance its MOU with Pionaire.

A year later in 2017, the firm signed a trilateral deal with PNOC-EC and Rosneft for the development of various oil projects in the country at the XXI St.Petersburg International Economic Forum in Russia. – Rappler.com