Facebook Twitter Copy URL
Copied
(UPDATED) But PT&T and Now Telecom say they are contesting the supposed outstanding fees, so these have 'no bearing' on their bids for the 3rd telco slot

MANILA, Philippines (UPDATED) – Unpaid supervision and regulation fees hound a couple of companies aspiring to be the country’s 3rd major telecommunications player, as the government plans to bar bidders with outstanding obligations to the National Telecommunications Commission (NTC).

Under the draft joint memorandum circular on the selection of the 3rd major telco player, prospective bidders should not have any “uncontested obligations” to the NTC as of January 31, like supervision and regulatory fees as well as spectrum user fees, penalties, surcharges, and interest.

“That provision will be in the draft terms of reference to be subjected to public hearing,” Eliseo Rio Jr, acting chief and undersecretary at the Department of Information and Communications Technology (DICT), told Rappler on Sunday, March 25. (READ: Naming Philippines’ 3rd telco might take longer than expected)

PT&T and Now Telecom are among the over 18 firms with unpaid supervision and regulation fees to the NTC as of December 31, 2017. 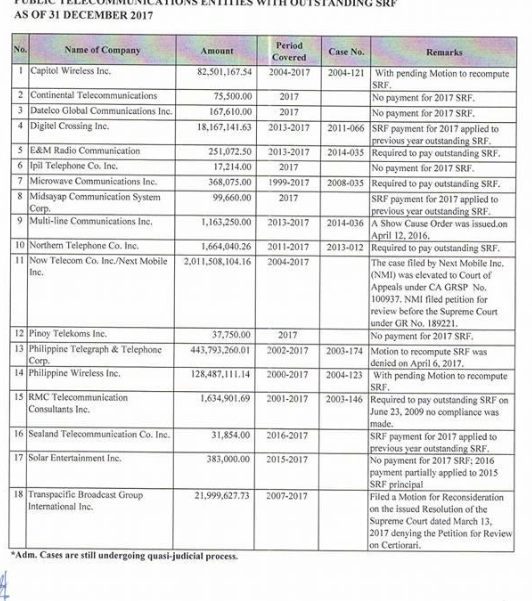 But PT&T chief operating officer Miguel Bitanga said the unpaid fees would not affect the company’s bid for the 3rd telco slot as the amount is being contested.

“Qualification pertains to uncontested fees whereas ours is contested. We have been working with NTC to resolve this even prior to the 3rd telco bid,” Bitanga told reporters.

The NTC document showed that PT&T filed a motion to recompute the total amount but the NTC denied the request on April 6, 2017.

Meanwhile, Kristian Pura, head of business development at Now Telecom, said his company has no outstanding obligations to the NTC.

“The P2-billion figure is wrong. Next Mobile (Now Telecom) has no liabilities to NTC, that is why we brought the case to the Supreme Court,” Pura told Rappler in a text message.

“Our position is that Next Mobile should not be required to pay regulatory fees because NTC denied the award of any frequencies, necessary for it to implement its cellular mobile telephony system license granted by no less [than] NTC itself in 2006,” he added.

Pura is saying that the NTC prevented Now Telecom from complying with its alleged obligations.

“We are confident that our case at the Supreme Court is strong. We immediately called up NTC and verified if this matter will be used as an issue against Now Telecom if and when we bid to become the 3rd telco,” he added.

The DICT is still in the process of finalizing the terms of reference for the selection of the 3rd major telco player. Rio had said the selection may have to wait until July this year. – Rappler.com

Editor’s note: This article previously said spectrum fees instead of supervision and regulation fees. We have corrected the error.