6-month Boracay closure to have minimal impact on economy – NEDA Facebook Twitter Copy URL
Copied
A National Economic and Development Authority official says the proposed 6-month shutdown of Boracay will 'only have 0.1% impact' on the country's gross domestic product growth

MANILA, Philippines – While the proposed 6-month shutdown of Boracay Island will have a minimal impact on the country’s economic growth, it can have an adverse short term impact on the local economy, the National Economic and Development Authority (NEDA) said on Tuesday, April 3.

Reynaldo Cancio, director for national policy and planning at NEDA, said in a media briefing on Tuesday that a 6-month closure is estimated to “only have a 0.1% impact” on the gross domestic product (GDP) growth.

“Even if the ban extends to up to 6 months, it would not impact the macrofundamentals,” Cancio added. (READ: 36,000 jobs, P56 billion ‘at stake’ if Boracay closed for a year)

NEDA Undersecretary for Policy and Planning Rosemarie Edillon said that NEDA has submitted to the Office of the President its recommendations, and the possible economic impact of the planned Boracay closure.

“We can’t discuss details, but we can discuss in broad strokes. We do have a count on how many jobs will be affected,” Edillon said during the briefing in Pasig City. 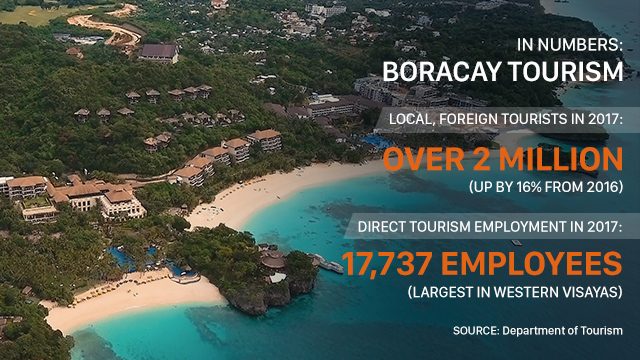 Based on data from Boracay Foundation Incorporated, a non-profit, non-stock association, there are over 17,000 employees who would be directly affected by total closure of businesses in the world-famous island.

Boracay Foundation added that another 19,000 workers from the informal sector – beach masseuses, tattoo artists, and vendors, among other workers – would also be affected by the temporary closure.

To help those who will be affected by the planned closure, Edillon said NEDA has recommended a contingency plan.

“We are also hoping the closure would happen during the lean season so the adverse effects would not be that much,” she added.

After receiving recommendations from 4 government agencies on what to do with Boracay, Malacañang is set to release its order on the island destination soon.

The proposed closure date of Boracay is April 26. – Rappler.com