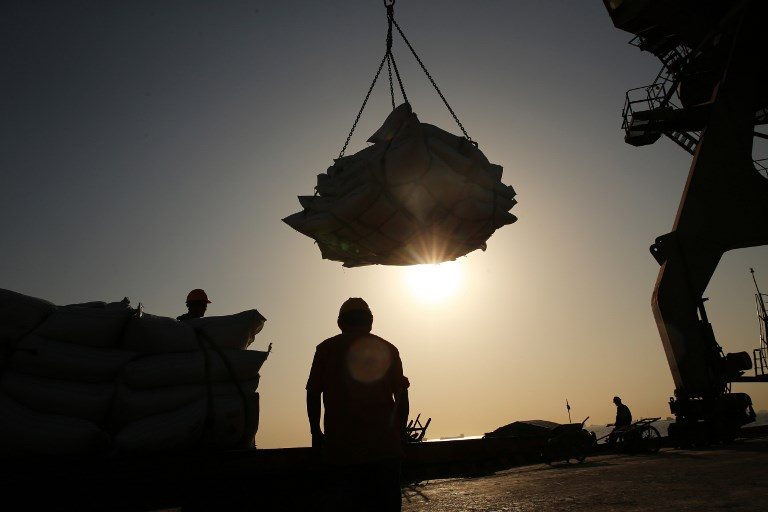 Facebook Twitter Copy URL
Copied
(UPDATED) Promising a 'new phase of opening up,' Chinese President Xi Jinping says during the Boao Forum for Asia that Beijing 'does not seek a trade surplus' and hopes to increase imports

Xi’s remarks follow weeks of tit-for-tat tariffs between Beijing and Washington and mutual threats of more levies on hundreds of billions of dollars worth of products that have raised fears of a trade war that could lacerate the global economy.

While he did not directly mention US President Donald Trump’s demands, Xi told an economic forum on the southern island of Hainan that Beijing “does not seek a trade surplus” and hopes to increase imports.

Promising a “new phase of opening up,” he said China will “considerably lower” tariffs on cars and other products this year, take measures to liberalize automobile investment, and protect intellectual property – all areas that have been high on the list of demands by Washington.

“Economic globalization is an irreversible trend of the time,” Xi told the Boao Forum for Asia.

“The door of China’s opening up will not close, it will only open wider and wider.”

But he gave no details or an exact date for taking the measures.

The car tariffs were the target of a Trump tweet on Monday, April 9.

“Does that sound like free or fair trade. No, it sounds like STUPID TRADE – going on for years!”

Asia markets – hammered along with global equities by the trade row in recent weeks – rallied on the speech Tuesday.

“Asian markets are happy, US and European markets are likely to be happy too, but it’s unlikely to generate the same optimism in Washington,” said Christopher Balding, a Peking University economics professor.

“The tone was conciliatory but Washington is bargaining for action, not promises.”

Christine Lagarde, managing director of the International Monetary Fund, congratulated the Chinese leader on his commitment to openness in a speech to the forum.

The measures he laid out such as “removing caps, reducing barriers” were “very specific,” she told the Boao Forum, an Asian version of the World Economic Forum, which drew global leaders to Hainan this week.

Beijing’s restrictions on foreign ownership in the auto sector have forced foreign companies to partner with Chinese firms and share their technology.

Elon Musk, CEO of electric car giant Tesla asked for Trump’s help on the issue this year, alluding to the troubles his firm has faced to producing in China.

The threatened tariff war was spurred by a US Trade Representative investigation into China’s intellectual property practices, which alleged wide-scale theft and forced technology transfers.

“This year, we will reorganize the State Intellectual Property Office to strengthen law enforcement,” he told the forum.

“We encourage Chinese and foreign companies to carry out normal technical exchanges and cooperation to protect the legitimate intellectual property rights of foreign-funded enterprises in China,” he said.

Pledges on autos and IP were accompanied by a promise to push through reforms in the financial services industry, which would open up to more foreign participation – reforms first announced last year.

But Chinese officials have promised many of the measures in the past with little action – Washington says it has grown tired of China’s unfulfilled pledges, while the EU Chamber of Commerce in China summed up the exasperation last year as “promise fatigue”.

Fed up, the United States has slapped tariffs on imports of steel and aluminum, followed by planned levies on $50 billion worth of goods from China over Washington IP theft allegations.

China retaliated by unveiling planned levies on $50 billion worth of major US exports, including soybeans, cars and aircraft.

Trump then threatened to impose more tariffs on $100 billion worth of Chinese goods, prompting Beijing to warn that it would stand firm and punch back with great strength.

But Trump suggested on Sunday, April 8, that he saw an end to the dispute, saying on Twitter that he will “always be friends” with Xi  and that “China will take down its trade barriers because it is the right thing to do.”

On Monday, however, China’s foreign ministry warned that trade talks with the United States were “impossible” under current conditions. – Rappler.com