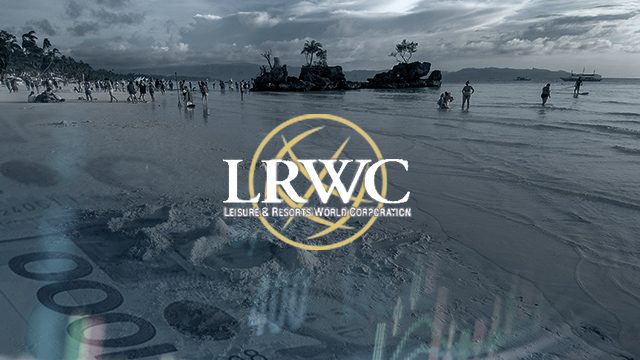 MANILA, Philippines – Share prices of listed Leisure & Resorts World Corporation dipped by 10.08% on Tuesday, April 10 – the lowest since August 2015 – as investors panicked over President Rodrigo Duterte’s plan to convert Boracay into a “land reform area” after the 6-month rehabilitation period.

Harry Liu, president of brokerage firm Summit Securities Incorporated, said in a phone interview that the investing public was concerned over Duterte’s recent pronouncement. But he said Leisure & Resorts World stocks will likely bounce back unless the President pushes through with the supposed land reform.

“Any market [will] always react [to] something that is negative – even if it is not certain or executory yet. I think the public just panicked by what the President wants to happen. But there is no order yet on what the President really wants to happen. So unless there is an order that he will indeed convert [Boracay] into a land reform area, then stocks of [Leisure & Resorts World] will likely bounce back,” Liu told Rappler.

The dip in stocks comes after Duterte denied on Monday, April 9, that there is a plan to build a casino in Boracay.

“I never said about building anything or even a nipa hut there. What I said is that the island itself is owned by the government. I’ve said before that it is agricultural and forestal,” the President said in a press conference on Monday.

But in December 2017, Galaxy Entertainment chairman and founder Lui Che Woo paid a courtesy call on Duterte to discuss his firm’s plan of investing as much as $500 million for a “low-rise, eco-friendly resort development” in Boracay.

The Philippine Amusement and Gaming Corporation (Pagcor) on March 20 granted Boracay Philippines Resort and Leisure Corporation – the local operating unit of Galaxy Entertainment – a provisional gaming license, allowing it to set up and operate a casino in Boracay.

Pagcor Chairperson Andrea Domingo said in a statement on March 26 that Galaxy Entertainment and Leisure & Resorts World secured a Letter of No Object from the local government, which is one of the requirements for a provisional license.

Galaxy Entertainment and Leisure & Resorts World will still have to comply with all the environmental regulations in connection with the construction of its integrated resort and casino. (READ: LIST: Planned developments in Boracay)

“This integrated resort and casino project will be built on the part of Boracay where there are no buildings yet; not on the very congested part of the island. What we granted was just a provisional license,” Domingo said.

Even before the group bagged the gaming license, Leisure & Resorts World already bought a 23-hectare land in Barangay Manoc-Manoc, Boracay as the location for the planned resort and casino.

The provisional gaming license jumpstarts the process of securing all necessary permits and clearances before the group starts the construction, which is seen in the next 12 months.

The casino project has raised concerns among stakeholders, who are questioning the intention of the 6-month closure order. Jose Clemente III, president of the Tourism Congress of the Philippines, said the government should identify the carrying capacity of Boracay first before it allows developers to put up more businesses.

Based on the casino project’s timetable, construction would take at least 3 years with operations expected to begin soon after, or as early as 2021, Leisure & Resorts World corporate secretary Katrina Nepomuceno had said. – Rappler.com