JobStreet 2018 report: Only 24% of employers willing to hire K to 12 graduates 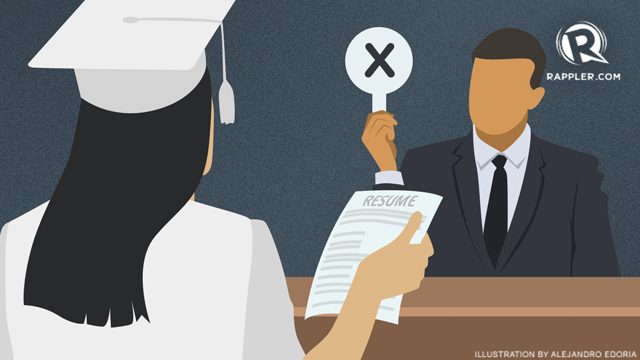 Facebook Twitter Copy URL
Copied
According to JobStreet.com's 2018 Fresh Graduate Report, 35% of employers are not yet ready to hire K to 12 graduates, while 41% say their companies are still evaluating it

MANILA, Philippines – Are companies ready to hire K to 12 graduates?

Only 24% of employers in the country responded positively to this question, based on JobStreet.com’s 2018 Fresh Graduate Report released on Wednesday, April 18.

These employers are from the manufacturing, professional services, retail, machinery and equipment, and business process outsourcing (BPO) industries.

Why this matters: The biggest batch of students under the K to 12 program is expected to graduate in 2018, 5 years after then President Benigno Aquino III signed the Enhanced Basic Education Act of 2013 that implemented the new curriculum. (INFOGRAPHIC: 10 things about K to 12)

According to JobStreet.com Philippines country manager Philip Gioca, about 800,000 students are expected to graduate from the K to 12 program this year.

These students graduate from the program with the promise that they are already employable, should they decide to look for a job instead of pursuing higher education. Now that they can enter the workforce, however, not all employers are willing to accept them. (READ: Are companies still hesitant to hire K to 12 graduates?)

According to the JobStreet report, employers who said they are not yet willing to hire K to 12 graduates cited having a college degree as a primary qualification for employment.

Of the employers unwilling to hire the K to 12 graduates, 16% said the students have little to no working experience, while 20% said they did not have any vacancies.

Other employers claimed current openings are only for college graduates or that K to 12 graduates are not qualified for positions in their company.

Of the employers who are still evaluating the matter, 60% said part of the evaluation is the readiness of their respective companies to hire the graduates, while the rest said they would eventually hire them but did not give a definite timeline

Meanwhile, competition for jobs remains stiff. Even with 24% of employers willing to hire K to 12 graduates, the latter would most likely compete with college graduates for the same positions.

“What we have observed is that for employers who said yes, they are open to both college graduates and K to 12 graduates but they [still] have to come for the same [job] criteria,” said Gioca. (READ: JobStreet 2018 report: Work ethic, communication skills important for employers)

If that is the case, Gioca said employers may be more inclined to hire college graduates.

“It’s a very competitive market so kahit ako ‘yung negosyante (even if I were the employer), I will get the most out of the opportunity now, which [is] I’ll prefer college [graduates]. But if I allow that person [from] K-12, pumasok siya sa akin (they pass standards), I will interview the same and I think there will ba a small chance the K-12 graduate will be part of the fold,” Gioca said.

He added: “Now competition has been stiff in the sense that they’ve been looking at attitude, analysis, communication skills. Whether you get that in school or other experiences, that’s what they look at.” – Rappler.com