May 10, 2018 10:04 AM PHT
Chrisee Dela Paz
Facebook Twitter Copy URL
Copied
(4TH UPDATE) Socioeconomic Planning Secretary Ernesto Pernia says Philippine economic growth in the first quarter of the year would have been well within government's target if it were not for high inflation 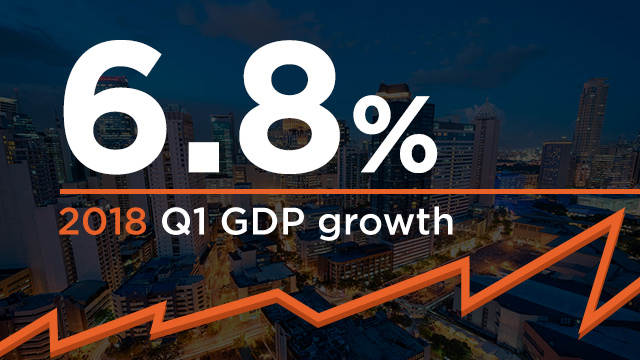 MANILA, Philippines (4th UPDATE) – Strong government and household consumption drove the Philippine economy to grow by 6.8% in the 1st quarter of the year, despite a slower agricultural output, higher inflation, and wider trade deficit.

National Statistician Lisa Grace Bersales announced on Thursday, May 10, that the gross domestic product (GDP) grew by  6.8% from January to March 2018. This is the 10th consecutive quarter that the economy grew by 6.5% or better.

This placed the country’s growth pace outside the government’s full-year target of 7% to 8%. (READ: Philippines hopes to pass rice tariffication law in 2018)

Socioeconomic Planning Secretary Ernesto Pernia said that inflation was the “spoiler,” as he noted that GDP growth for the first quarter would have been within target if not for rising inflation.

“[D]espite improving labor market conditions, private consumption eased somewhat to 5.6% due to rising inflation, which is a major factor, and interest rates, and weaker consumer confidence,” Pernia said in a briefing in Pasig City on Thursday, May 10.

Inflation, or the movement of prices of basic goods and services, rose to another 5-year high to 4.5% in April 2018.

Had inflation been lower than 4.5%, Pernia said the country’s economic growth in the 1st 3 months of the year would be “approaching the middle” level of the government’s target of 7% to 8%.

Even with the higher-than-expected inflation rate, the GDP growth in the 1st quarter was higher than that in the same period a year ago, thanks to the upbeat performance of public construction, government consumption, and capital formation.

External demand also weakened significantly, with net exports plunging to 6.2% in the first quarter of the year, from 17.4% in the same period a year ago.

“Growth in exports of goods eased to 2.9%, after consistent growth averaging 21.1% in 2017. Net exports therefore worsened during the quarter. This is something we need to keep an eye on,” Pernia said.

Malacañang welcomed the latest GDP figure. “We are optimistic that our economic momentum would continue to be sustained with higher tax revenue collection and bigger public spending in infrastructure,” said President Spokesman Harry Roque.

The 1st quarter performance also showed the Philippines is still among the fastest-growing economies in Asia, after Vietnam’s 7.38%, and at par with China’s 6.8%.

The Philippines – once called the “Sick Man of Asia” – has been aggressively launching reforms, like updating its tax system and filling the infrastructure gap to boost its economy, which has been growing for 76 straight quarters.

Philippine GDP been growing above 6% for 6 consecutive years, or since the administration of Benigno Aquino III.

In the past quarters, the Philippines, China, Vietnam, and India have been in the running for the title of “fastest-growing economy in the world.”

But among the member-economies of the Association of Southeast Asian Nations (ASEAN), Vietnam has been a strong contender. It has been outpacing the Philippines as the best performing economy in the regional bloc since the 3rd quarter of 2017.

Among the pioneering 5 members of ASEAN, however, the Philippines remains the best performer. The ASEAN-5 is composed of Indonesia, Malaysia, the Philippines, Singapore, and Thailand. 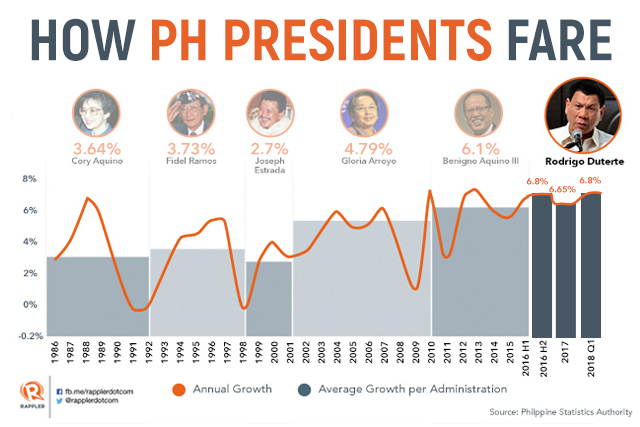 The country’s economy had a sluggish start in 2017 due to the slow implementation of big-ticket infrastructure projects, which gradually began to pick up in the 2nd quarter of that year. It then slowed down to 6.5% in the 4th quarter of the year and began picking up again in the 1st quarter of 2018.

The World Bank and the Asian Development Bank (ADB) both expect the Philippines to remain among the fastest-growing economies in the region for 2018, with forecasts of 6.7% and 6.8% growth, respectively. – with a report from Paterno Esmaquel II/Rappler.com