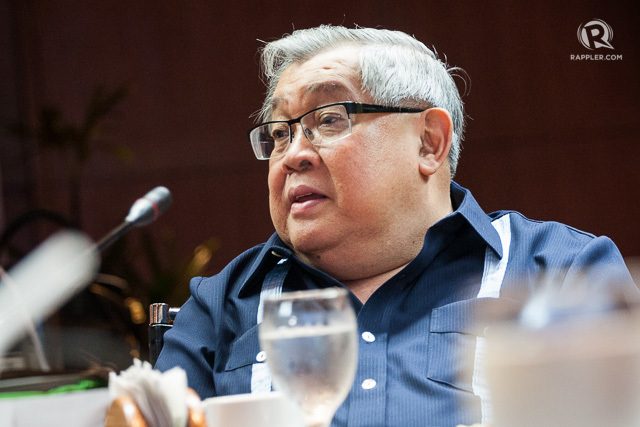 Facebook Twitter Copy URL
Copied
The listed broadcast giant says its digital transmission device is now being manufactured in China, with over one million units seen to be released in a year's time

MANILA, Philippines – Broadcast giant GMA Network Incorporated is set to commercially launch a digital transmission device in June, which according to its chief is “cheaper and smaller” than that of its rival network.

“It is patented. Our device has so many features. What is available in the market just connects in one way – from TV station to the TV set. There is no return. In our device, you have data. What you can do in your smartphone, you can also do there. You can communicate, record, wherever and whenever,” GMA chairman and chief executive officer Felipe Gozon told reporters on the sidelines of an annual stockholders’ meeting in Quezon City on Wednesday, May 16.

GMA Network is adapting the Japanese Digital Terrestrial Television Broadcast (DTTB) standard, in line with the rules and regulations of the National Telecommunications Commission (NTC).

It was in December 2014 when the Philippine government cleared the way for the country’s shift to a DTTB system. Broadcast companies were told to simulcast DTTB and shut off analog TV by 2019.

Barely two months after the digital shift order, GMA’s rival ABS-CBN Corporation pioneered the digital shift by selling “black boxes” for P2,500. These are meant to replace the analog antennas installed in 17 million TVs in the country.

“[Our device] is now being manufactured in a factory in China,” Gozon said, adding that GMA targets to release over one million digital transmission devices in a year’s time.

Before the end of May, Gozon said GMA’s digital TV signal will be available in other key areas in Luzon and the Visayas. (READ: Hardware boom comes with PH shift to digital TV)

“By June, our digital operations will already reach Mindanao. After we are through with our digitization project, we will be covering 83% of the Philippines. For the 27% balance, there are only trees and farmlands and no TV sets,” he added.

Gozon said GMA has allocated a total of P700 million to P800 million for its Japanese DTTB adoption, which is much lower than ABS-CBN’s about P3 billion. (READ: PH telcos, TV networks ride double-edged digital wave)

As the network remains “very prudent” when it comes to managing operating expenses, it expects to have a higher net income this year than the P2.560 billion recorded in 2017.

“Based [on] the sales in April and May alone, we are confident that we will exceed our gross revenues in 2017 because we have been very prudent in controlling our operating expenses. Our projection is we will have a bigger net income in 2018 than in 2017,” Gozon said before the GMA shareholders.

“We funded our digital [TV] project without borrowing anything, and yet, we were still able to declare cash dividends this year. I think that says a lot on how we manage our expenses,” he added.

Gozon told the network’s shareholders that he expects the 2nd quarter financial results to offset the 49% decline in net income during the 1st 3 months of the year.

“In the 1st quarter, we were behind by about P400 million because big advertisers did not go in the market right away – unlike in 2017. They (big advertisers) waited. But in April, we were ahead by around P170 million,” Gozon added.

In 2017, GMA saw its net income plunge by 30% from the 2016 level, due to the absence of election-related advertisements. – Rappler.com