MANILA, Philippines (UPDATED) – The Philippines plummeted 9 notches to 50th spot out of 63 economies in this year’s World Competitiveness Yearbook (WCY) rankings of the International Institute of Management Development (IMD).

This is the country’s largest year-on-year decline over the last decade and the sharpest drop among peers in Asia Pacific. From 2014 until last year, the Philippines’ ranking fluctuated in the low 40s. 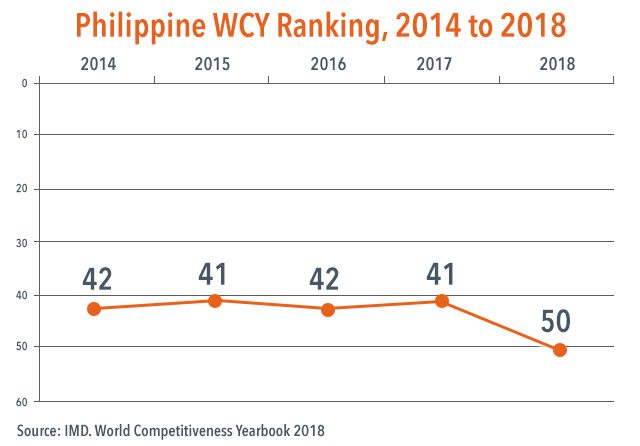 The WCY ranks the competitiveness of countries based on 4 pillars – economic performance, government efficiency, business efficiency, and infrastructure. The Philippines dropped in rank across all factors in the latest rankings.

The biggest fall was in economic performance, which plunged to 50th from last year’s 26th spot.

Infrastructure continued its losing streak, now at 60th from 54th.

The United States has returned to the top spot this year, toppling Hong Kong. Singapore, the Netherlands, and Switzerland round up the top 5.