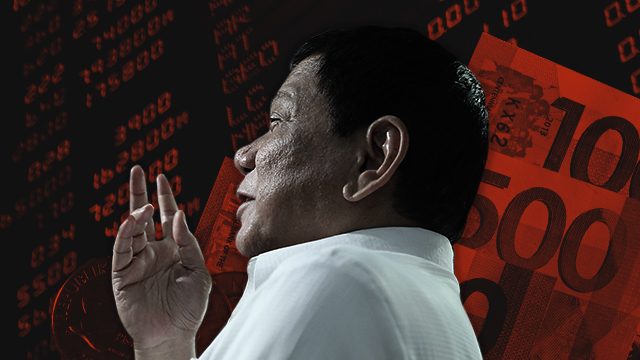 Capital Economics senior Asia economist Gareth Leather said in the firm’s report that “a string of inflammatory comments and policy changes by Duterte have raised concerns in the minds of investors over the President’s judgement and commitment to the rule of law.”

The report also noted the stock market’s underperformance and the decline of foreign direct investment pledges under Duterte’s watch.

The report also underscored the negative effects of accelerated inflation and the surge in imports of capital goods due to the government’s aggressive infrastructure push.

Inflation peaked at 4.6% in May and the peso slid to a 12-year low, trading at P53 against the United States dollar.

Leather also noted how the country’s history of “poor leadership and political uncertainty” can affect the economy.

“The biggest risk for the Philippines is that history now repeats itself. There are already signs that things are taking a turn for the worse,” added Leather.

But Capital Economics did say that the Philippine economy is still rosy and Duterte “has not been the disaster” some have feared since he left the economic aspects of the job to technocrats.

“For the most part, Duterte has stuck to his campaign promise by staying out of the day-to-day running of the economy. Instead he has delegated economic management to a few respected officials, most importantly, Carlos Dominguez as finance minister, who has provided reassurance to investors concerned about Duterte’s war on drugs and other controversial policies,” the report said.

“Growth has remained strong, while economic policy has been left in the hands of technocrats, who have pushed through a number of sensible reforms,” Leather added.

Capital Economics also lauded the government’s Build, Build, Build program and the implementation of the Tax Reform for Acceleration and Inclusion (TRAIN) law.

The country’s gross domestic product (GDP) grew 6.8% in the 1st quarter. The growth was among the fastest in the region, but still below the 7% to 8% full-year 2018 target. – Rappler.com