Should we worry about the Philippine peso? 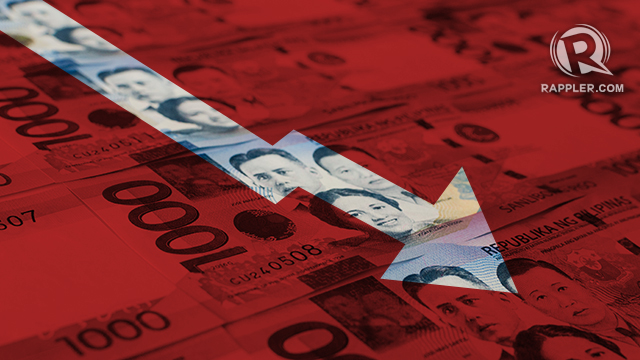 MANILA, Philippines – The Philippine peso has been dubbed Asia’s “most unloved” and “worst performing” currency after it fell to P53 to a dollar and traded at a 12-year low.

What is driving the downtrend? Should people be worried? (READ: [OPINION] Why is the Philippine peso the weakest in ASEAN?)

According to First Metro Investment Corporation, the investment banking arm of Metrobank, and the University of Asia & the Pacific (UA&P), the answer depends on the factors driving the peso’s weakness.

First Metro and UA&P noted that the growth of the United States economy, foreign selling, and the Philippines’ trade deficit have been pushing the peso downward.

The US dollar has strengthened since the end of the 1st quarter of 2018.

“Apart from the growth momentum, the effects of [US President Donald] Trump’s tax cuts will be felt by individuals and corporations starting the 2nd quarter of 2018. The same tax reform tries to attract back to the US some $2 trillion of cash held by US multinationals abroad,” First Metro and UA&P said.

The International Monetary Fund (IMF) projects the US economy to grow by 2.9% this year.

Foreign investors have also been selling off their peso-denominated financial assets due to the depreciation of the peso.

“Foreigners have been net sellers in the local stock market by a total of P52 billion (~$1 billion) from February to May this year,” said First Metro and UA&P.

The Philippines’ trade deficit has also been deteriorating. It reached a record $3.6 billion in April this year.

“For the first 4 months, this amounted to $12.2 billion, which if multiplied by 3 (simple annualization) yields $36.6 billion – over 20% higher than a year ago. However, this should not be viewed too badly as imports of capital goods (additions to productive capacity) have shown robust growth,” they said.

First Metro and UA&P remain optimistic on the fate of the peso in both the short and medium term.

They said the depreciation discourages imports and promotes more exports, which reduces trade deficits over the medium term. The increase in local production will also boost domestic employment.

First Metro and UA&P also said families of overseas Filipino workers (OFWs) will benefit from the weakened peso despite the accelerated prices of local goods.

“There are about 10 million OFWs, and with an average family size of 4.6, the peso slide benefits some 46 million Filipinos. Add to that the number of families dependent on exports, which account for 30% of GDP (gross domestic product), plus those that supply raw materials to exporters, we can easily conclude that a vast majority of Filipino families benefit from the higher peso-dollar exchange rate,” they said.

“If we take a longer view, the peso has actually appreciated by only 4.6% from 2004 to June 13, 2018, while our neighbors Indonesia and Vietnam had large cumulative depreciations in excess of 40% during the same period. Malaysia also shows net depreciation during the period,” they added.

However, labor groups said they are feeling the pinch.

“Now that we are approaching the lean months – June, July, and August – this is bad timing because the real value of their wages will erode further down,” Associated Labor Unions (ALU) spokesman Alan Tanjusay said in a statement.