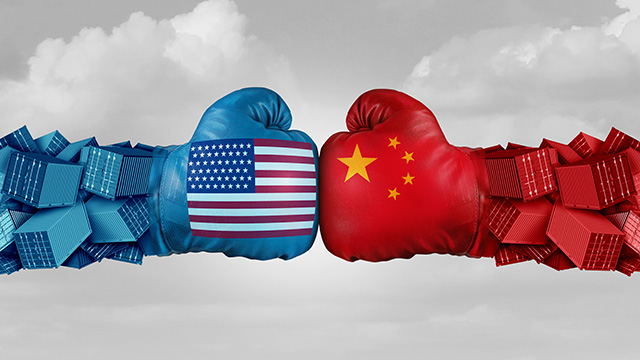 WASHINGTON DC, USA (UPDATED) – Steep American tariffs on Chinese goods worth tens of billions of dollars are due to take effect at midnight Thursday, July 5, as US President Donald Trump fires the decisive salvo in a trade war between the world’s top two economies.

Beijing has vowed to retaliate dollar-for-dollar, “immediately” imposing counter-tariffs on American exports despite warnings the burgeoning conflict will send shockwaves around the global economy and strike at the heart of the world trading system.

En route to Montana aboard Air Force One on Thursday, President Donald Trump erased any hope of a last-minute change, confirming the China tariffs would indeed kick in at the stroke of midnight.

But in a fresh sign of industry’s unease, a business survey on Thursday again showed the US services sector already has experienced supply chain interruptions and rising costs due both to the looming tariffs and those already in place.

“We’re starting to see signs of inflation, not sharp inflation, but definitely inflation,” Anthony Nieves, head of a services industry survey committee for the Institute for Supply Management, told reporters.

White House trade officials say the current strength of the US economy means the US can withstand more pain than its rivals if the battle escalates further.

But economists also say the trade war comes as the expansion of the world’s largest economies – which is bolstering demand for US goods and services – may be starting to run out of steam, raising the risks that tariffs could harm growth.

But the Trump team has paid little heed to such warnings, with Commerce Secretary Wilbur Ross this week slamming them as “premature and probably quite inaccurate.”

The US will levy a 25% tariff on more than 800 Chinese product categories, worth around $34 billion in annual imports, and has warned of more to come if China retaliates.

Trump has threatened to progressively ratchet up US penalties to a total of $450 billion in goods, which would represent the lion’s share of all of China’s exports to the United States.

A second tranche of 284 goods worth $16 billion a year is currently under review and could be added to the US list.

China is expected to retaliate as soon as the US tariffs go into effect, imposing duties on goods worth roughly the same amount but with a greater emphasis on politically sensitive agricultural products.

“The US has provoked this trade war. We do not want to fight it, but in order to safeguard the interests of the country and the people, we have no choice but to fight,” said China’s commerce ministry spokesman Gao Feng.

International Monetary Fund chief Christine Lagarde already sounded the alarm about the cycle of retaliation, saying it would only create “losers on both sides.”

And Gao noted that of the $34 billion in taxable products on the US list, about $20 billion – or nearly two thirds – are made by firms with foreign investment, including a “significant portion” from America.

US ‘firing at itself’?

“The US’s measures are essentially attacking the global supply and value chain. Simply put, the US is opening fire on the whole world, and also firing at itself,” Gao said.

But Trump tweeted this week that the American economy is doing “perhaps better than ever” even “prior to fixing some of the worst and most unfair Trade Deals ever made by any country.”

And in New York, stocks shrugged off their persistent trade war jitters to post solid gains ahead of the highly anticipated employment report on Friday, July 6. The benchmark Dow Jones Industrial Average added 0.8%.

Under the banner of his “America First” policy, Trump has also targeted other traditional trade partners of the United States, such as Canada, the European Union, Japan and Mexico.

Prices are rising, especially for steel and aluminum, and companies are starting to feel reticent about investments or planning to shift production overseas to avoid retaliation against US exports.

There have been immediate job losses at America’s largest nail manufacturer, Mid-Continent Nail Corporation, due to rising steel prices amid warnings the company may have to shut down operations altogether.

Iconic American motorcycle brand Harley Davidson has announced plans to move production overseas to evade the retaliatory tariffs from the EU, drawing a barrage of attacks on Twitter from Trump.

The influential US Chamber of Commerce urged Trump this week to reconsider his actions, saying the counter-tariffs now affected $75 billion in American exports and endangered US jobs.

While Trump touts announcements of jobs created in steel plants due to the tariffs, manufacturing industries warn many more jobs will be lost in companies producing autos, auto parts, appliances and other goods that depend on imported components.