Facebook Twitter Copy URL
Copied
'Transport infrastructure should be delivered as soon as possible especially now with the Build, Build, Build. But is the government ready and equipped to deliver all these plans?' asks UP Professor Dayo Montalbo as the Duterte administration marks its third year in office

MANILA, Philippines – The Department of Transportation (DOTr) has been “very slow” in its rollout of projects that seek to improve mobility across the Philippines, experts said, as the Duterte administration ended its second year in office.

In 2017, Metro Manila was ranked as the 3rd worst in traffic in Southeast Asia. With limited options, commuters are forced to waste hours in traffic.

In an interview, former transportation undersecretary Primitivo Cal said that the DOTr has failed to address the worsening traffic in Metro Manila two years since the new management took over under the Duterte administration.

The former transportation official cited the recent Commission on Audit (COA) report that flagged the slow implementation of DOTr projects.

According to COA, 144 of 150 locally funded and all 9 foreign-assisted projects were “slowly” implemented, as less than 75% of their total funding had been released. The bulk of these slow-moving projects were in the maritime and the aviation sectors. Among 46 airport projects, only 16 received funding, while 47 of the 77 projects for ports, lighthouses, and harbors were funded in 2017.

In total, the DOTr failed to spend P12 billion from its P71.2-billion allocation in the 2017 national budget, according to state auditors.

The past year also saw almost daily breakdowns of the 18-year-old MRT3, following the termination of its contract with previous contractor Busan Universal Rail Incorporated in November 2017 due to poor maintenace service.

Another controversy involving the MRT3 is the non-use of the 48 trains delivered in 2016 by China-based CRRC Dalian due to compatibility issues. DOTr commissioned Germany’s TUV Rheinland to conduct an audit of the trains, “which can be used” later this year. (READ: Dalian trains may be used later this year but…) It also took the DOTr two years to finally began distributing license plates, after years of backlogs. The backlog stemmed from legal questions raised against the controversial P3.8-billion contract bid out in 2013,

The National Economic and Development Authority (NEDA) had identified 75 high-priority projects, 55 of which are transportation-related. Of the latter, only 7 began construction in 2017.

Cal said that the current DOTr officials should have known how to speed up the rollout of the projects, and how to address other problems since these are not new and have been around prior to their appointment. (READ: Hits and misses of Duterte’s infrastructure push)

“They have a problem with the rollout [of projects], and addressing existing problems when the new administration came in. Even the distribution of plates, it’s very slow. They should’ve known how to fix that immediately,” Cal said.

“When they came in, they already knew the problems. They should’ve known what to prioritize. How can they say that they performed better?” he added.

Transportation Secretary Arthur Tugade had said the delays were due to policy shifts and not because they were “negligent”.

For another transportation expert, it just takes strong political will – a promise of the Duterte administration – to improve mobility and employ sustainable transport solutions.

Dayo Montalbo, Associate Professor at the UP School of Urban and Regional Planning, said that politics plays a big role in improving transport options in the country.

He cited the implementation of the multi-million-peso bus rapid transit (BRT) projects in Metro Manila and Cebu. The DOTr had recommented the cancellation of the project, citing physical infrastructure constraints.

Tugade had said in news briefings that the Metro Manila BRT, one of the government’s high-impact priority projects, would not help ease traffic congestion in major thoroughfare EDSA.

“The BRT assumes a dedicated lane along EDSA. The current situation of 5 lanes is with that much traffic – maybe BRT is not the solution to [traffic] on EDSA,” the transportation chief earlier said. 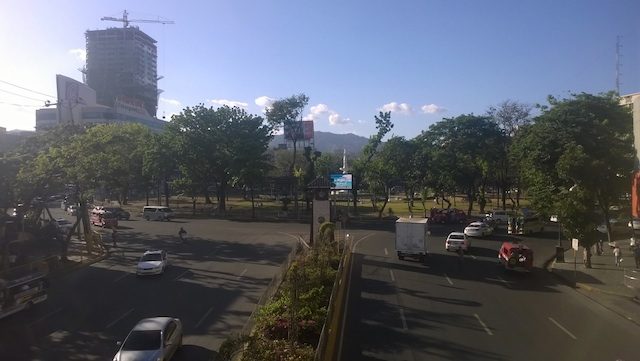 The Cebu BRT has a better chance of implementation. The DOTr is again considering it as part of its “basketful of solutions” along with railway projects.

According to Montalbo, who conducted the feasibility studies for the Manila-Quezon Avenue and Cebu BRT projects, there seems to be a “lack of clear direction and result” on the part of the government.

“The role of the government is to have a clear vision and strong commitment to get things done, and not be swayed by competing and conflicting interests,” he said.

“Projects get delayed, if not canceled. Things get done very slowly, if at all accomplished, because of all these conflicting, competing interests – and the totality of that is really politics,” the expert added.

What can be done in the meantime?

Montalbo said that the current “policy shift” being implemented – particularly in Metro Manila – seems to “imply support for private vehicles,” which is not consistent with sustainable transport policies.

He also said the government should ramp up its efforts to boost the capacity of the country’s transportation system. This, he said, can be done while Filipinos wait for the P354-billion Subway project in Metro Manila and the Mindanao Railway System.

“If we have our transport system rationalized, then we will have just the right number of public transport vehicle in our roads, adequately serving demand,” Montalbo said.

But problems still hound the rollout of the PUV modernization program, with only P88.5 million of the P569-million budget downloaded to the Land Transportation Franchising and Regulatory Board (LTFRB) and UP-Diliman as implementing agencies.

State auditors said that the delay stemmed from the LTFRB’s failure to complete the rationalization of public transport routes and building the capacity of local governments to implement the project.

There was also a backlash against the modernization program. Transport groups slammed it as  “anti-poor”, as authorities stepped up the crackdown on outmoded jeepneys earlier this year, triggering transportation strikes.

As the Duterte administration enters its third year in office, experts have the same advice – and question to the government.

“Transport infrastructure should be delivered as soon as possible especially now with the Build, Build, Build. But is the government ready and equipped to deliver all these plans?” Montalbo asked. – Rappler.com