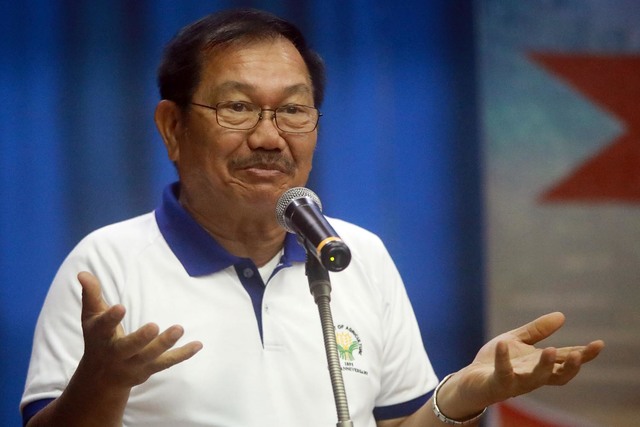 MANILA, Philippines – After economic managers pointed out the poor agricultural output as one of the major forces that dragged down the country’s growth, Agriculture Secretary Emmanuel Piñol defended his agency and asserted that his sector would “not be made a whipping boy.”

“You cannot squeeze milk from a thin and hungry cow!” Piñol said in a Facebook post on Monday, August 13.

The country’s gross domestic product (GDP) grew by only 6% in the 2nd quarter of 2018, missing market and government estimates.

Socioeconomic Planning Secretary Ernesto Pernia said they are “gravely concerned about the almost stagnant output of the agriculture sector” which clocked in at only 0.07%. The sector’s overall growth was at a disappointing 0.2%.

Pernia also hit the Department of Agriculture (DA) over inflation hitting 5.7% in July due to the lack of cheap rice in the market.

Piñol admitted that the DA indeed missed its growth targets, but pointed out the agency needs support and not budget cuts.

“I knew it but I never complained even when the budget of the Department of Agriculture was slashed by about P15 billion from P64 billion in 2016 to the proposed P49 billion in 2019,” he said.

To improve agriculture in the country, Piñol recommended that the government’s infrastructure push extend to arterial and farm-to-market roads.

“While government has poured hundreds of billions of pesos widening the highways and destroying still usable highways to repave these with concrete, the farm-to-market road program has received a pittance – P9.5 billion – good only for 900 kilometers,” he said.

The agriculture chief also asked the government to review cash transfers for poor families. He said it would be better to provide livelihood assistance instead of directly giving out cash.

Despite the criticism against him, Piñol said the economic managers’ words have given him “the best arguments” to assert that agriculture should be given its “fair share of attention” and budget. – Rappler.com