Sep 10, 2018 4:22 PM PHT
Rappler.com
Facebook Twitter Copy URL
Copied
All 10 are being investigated by the Department of Public Works and Highways 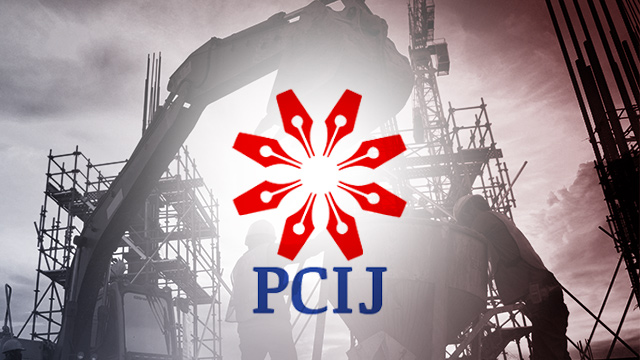 MANILA, Philippines – The top 10 firms that bagged a total of P68.5 billion worth of contracts for the govenrment’s “Build, Build, Build” infrastructure program has a history of fraud, corruption, and blacklisting.

Worse, they all share a record of unfinished projects and unsatisfactory performance, a report by the Philippine Center for Investigative Journalism (PCIJ) revealed.

According to the PCIJ, over 2,200 contractors participated in the bidding process. The following got the biggest amounts of contracts:

Apart from the top 10, only 80 other contractors won at least P1 billion worth of projects, “while others got much, much less.”

All 10 are being investigated by the Department of Public Works and Highways (DPWH). (READ: Hits and misses of Duterte’s infrastructure push) 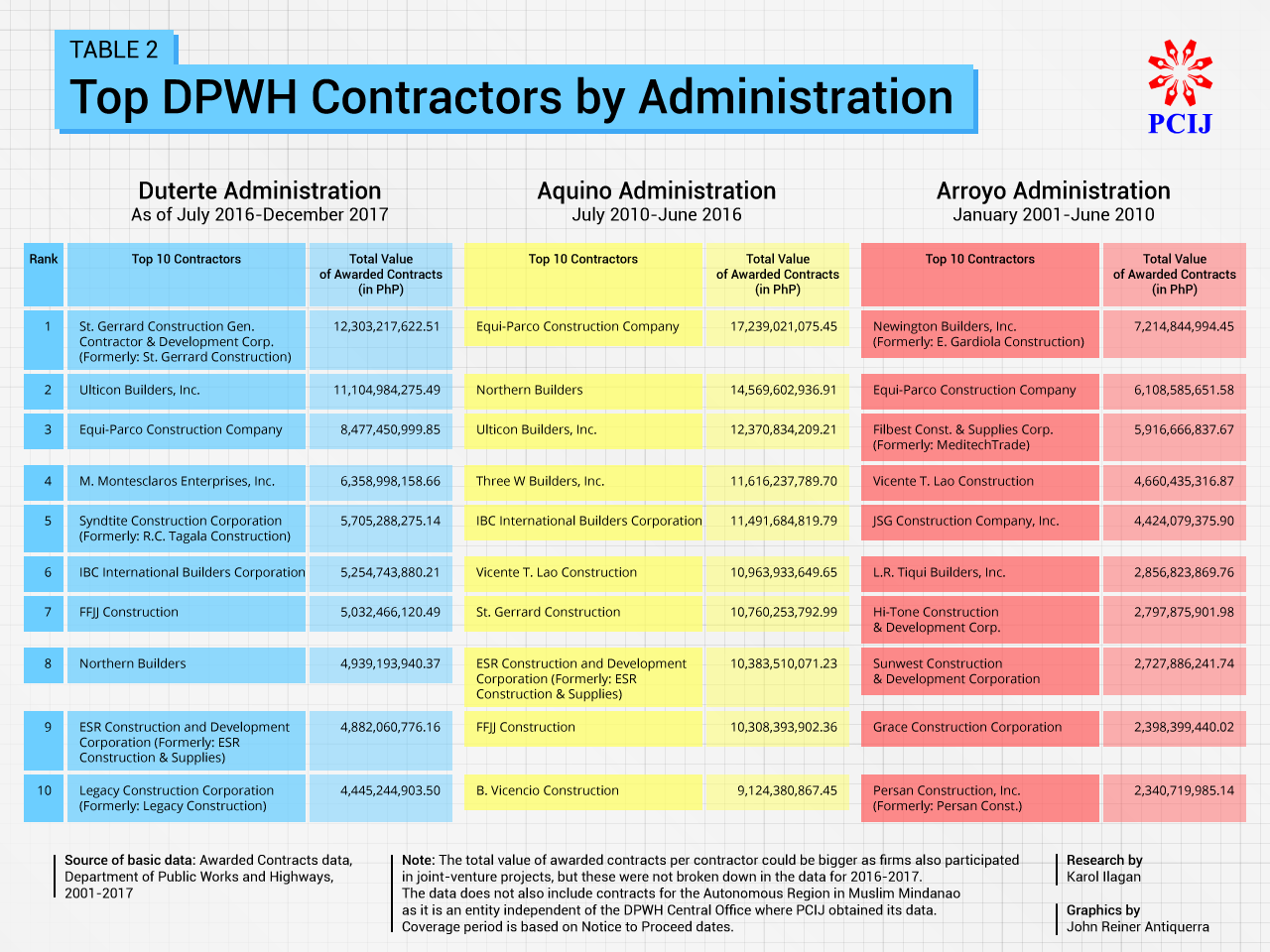 PCIJ found that 3 of the top contractors had history of being suspended or being blacklisted: Gerrard Construction General Contractor & Development Corporation, M. Montesclaros Enterprises Incorporated, and Syndtite Construction Corporation.

Syndtite’s former firm, RC Tagala, was blacklisted by the DPWH for one year starting August 2018 due to project delay. It was blacklisted after it incurred a negative slippage of 15% and for failing to correct the violations.

In 2016, RC Tagala was also suspended for violating the terms of contract on the Labo bridge project in Camarines Norte. Prior to suspension and blacklisting orders, Syndtite had been registered with the SEC in April 2015.

Meanwhile, M. Montesclaros Enterprises Incorporated was suspended in December 1989, but official records did not show why it was suspended. The suspension was lifted roughly 6 months after.

Of the 10, 4 are involved in graft cases: Syndtite, IBC, Legacy, and M. Montesclaros. Syndtite’s case is pending, while the rest have been acquitted.

Syndtite, through RC Tagala, was charged by the anti-graft court Sandiganbayan for anomalies in projects funded by the Malampaya gas operations. The complaints were filed in 2008 and 2009. The anti-graft court found that several infrastructure projects were declared completed, but were not actually finished.

In 2000, Legacy was involved in paying P2.82 million worth of dishonored checks to New Bian Yek Commercial for pipes that would be used for Valencia, Negros Oriental, waterworks system project. The Supreme Court (SC) in 2009 found that the local government conspired not to pay the obligation.

But in 2015, the Sandiganbayan Fifth Division acquitted Legacy and the co-accused because the prosecution failed to prove guilt beyond reasonable doubt.

The Sandiganbayan found that officials falsified minutes of the Maasin municipal council’s meetings in Iloilo to make it appear that resolutions were enacted to favor a signing of agreement with IBC in 2015.

The accused were meted with imprisonment of 6 years and one month to 10 years, but the SC acquitted IBC in 2010 for the prosecution’s failure to prove guilt beyond reasonable doubt.

M. Montesclaros’ stockholders were acquitted in a graft case filed in 2004 by the Office of the Ombudsman, involving an anomalous issuance of permits despite the lack of track record in the quarrying business. The Sandiganbayan in 2010 said the Ombudsman failed to prove the allegations.

PCIJ found that Equi-parco has been a top contractor of the government since the Arroyo administration.

Equi-parco is owned by incumbent Butuan Mayor Ronnie Vicente Lagnada. Based on records, it was registered with Ruben Javier, another civil engineer like Lagnada himself.

PCIJ found that Equi-parco never got contracts from the local government, only projects it won from the national government. Of the total P8.48 billion worth of contracts awarded to the firm, some P70.12 million DPWH projects were in Butuan, Lagnada is mayor.

It is still unclear, PCIJ said, whether Lagnada had divested from Equi-parco.

All top contractors have posted poor or unsatisfactory ratings, based on the Construction Performance Evaluation System (CPES) reports approved by the Construction Industry Authority of the Philippines.

The passing mark is 82%. Projects with unsatisfactory rating received an evaluation of 75% to below 82%, while poor projects means ratings are below 75%. (READ: Build, Build, Build: P73 billion worth of DPWH projects delayed)

According to guidelines, contractors with poor or unsatisfactory ratings in any of its projects should be disqualified in the next bidding.

Of the top contractors, FFJJ Construction got the most unsatisfactory and poor ratings at 18 projects. It is followed by RC Tagala with 8 implemented projects:

What did DPWH do?

Despite the apparent bad track record of top contractors, DPWH told PCIJ that “they did not intervene” in the bidding process, because “that’s what the law mandates.”

“So if the previous administration did not look into their prior performance before bidding out another project…it will not happen in this administration because of the Infratrack system,” DPWH spokesperson Anna Mae Lamentillo told PCIJ.

The Infratrack system is the software DPWH uses to track the slippages of projects. In July, DPWH said they would suspend 43 contractors due to project delay of more than 15%.

Lamentillo told PCIJ that “some of the 10 firms” are part of those that will be suspended, particularly RC Tagala, now operating as Syndtite.

“For as long as the procurement law allows it, DPWH cannot intervene. You cannot participate because then we will be contradicting the law. We will be violating the law,” Lamentillo said.

All of the contractors are under investigation for various reasons. – Aika Rey/Rappler.com