Expensive sili in markets? Plant your own, says Piñol 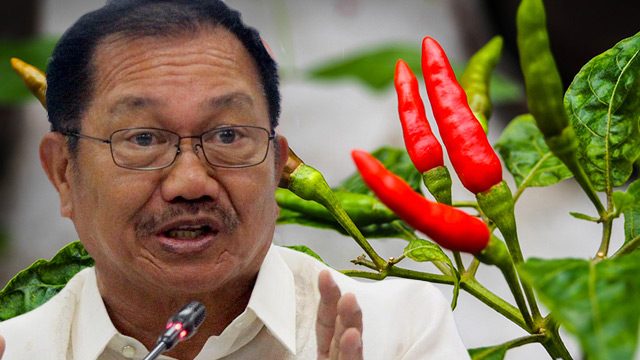 MANILA, Philippines – Social media was on fire after reports that the price of sili or red chili pepper reportedly soared to as much as P1,000 per kilo in markets.

“In these times, when the price of almost every commodity has gone up in the market because of the increase in fuel prices and electricity rates, it would be wise to be innovative,” Piñol said in a Facebook post on Friday, September 7.

He also shared that sili was only at around P50 per kilo in his hometown Kidapawan in North Cotabato. (READ: EXPLAINER: How inflation affects you)

Rappler inspected prices in some groceries and markets in Quezon City last September 7. Sili was sold at P610 per kilo in SM Cubao, while Nepa Q Mart offered it at P800 per kilo.

Kamuning Market reportedly sold sili at P1,000. However, sellers refuted the figure and said that prices only went up to as high as P800. Prices were now down to P680.

Tips on how to grow sili

“The reason for the dramatically lower price as compared to prices in Metro Manila is because almost every farmer in the provinces plants sili in his backyard,” he said. (LOOK: Cooking pinakbet under sizzling inflation)

He recommended consumers to sun-dry sili, get some seeds, and plant them in flower pots.

“When you gargle in the morning when you wake up, just throw the water in the pot. Before you know it, you would just wake up one morning to see your plants adorned with red fruits,” Piñol added.