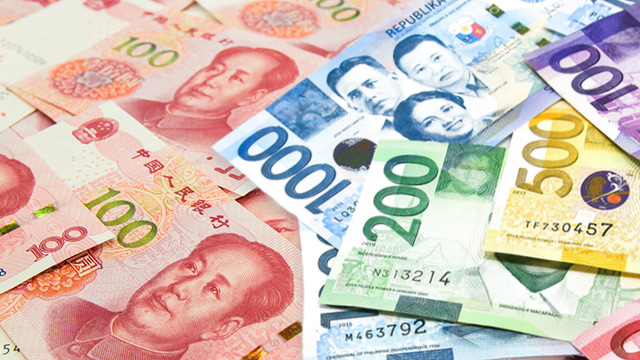 MANILA, Philippines – Transacting and exchanging Chinese currency to and from the Philippine peso will soon be cheaper and easier, thanks to the establishment of the Philippine Renminbi Trading Community (PRTC) and the peso-renminbi (RMB) spot market.

The Bank of China-Manila struck a deal on Tuesday, October 31, with 13 major Philippine banks to create the peso-yuan trading facility, which will facilitate the direct foreign exchange trading of the two currencies.

The arrangement enables a direct conversion between the peso and yuan, instead of converting them to dollars first, making transactions between China and the Philippines faster and cheaper.

Thirteen banks signed the memorandum of agreement. The transactions will be under the direct supervision of the Bangko Sentral ng Pilipinas (BSP).

“We take this major step forward in the economic partnership between the Philippines and China. On both sides, there is confidence that this partnership will bring great benefits to both our peoples,” Dominguez said during the MOA signing ceremony.

He said the creation of the currency trading platform will reduce the costs of doing business for Chinese and Filipino businessmen.

Dominguez said that businessmen from both the Philippines and China can save as much as 3% of transaction value once the direct currency trading platform is up and running.

He also said that the facility would help save Chinese investors up to P750 million in costs, making the Philippines an attractive destination for Chinese investments.

“Even cornering just a little over 1% of this amount with the establishment of the currency trading platform would translate into $1.5 billion-worth of [Foreign Direct Investments] from China alone,” Dominguez said.

The Philippines hopes to set up similar currency conversion arrangements with its other major trading partners, with Japan possibly the next country for a yen-peso direct conversion platform. – Rappler.com