Nov 7, 2018 2:36 PM PHT
Allan Nawal
Facebook Twitter Copy URL
Copied
The Philippine Statistics Authority says the October inflation rate for all items increased to 7.6% in Northern Mindanao from September's 6.9%, while Caraga had 6.9% in October, up from from September's 6.1% 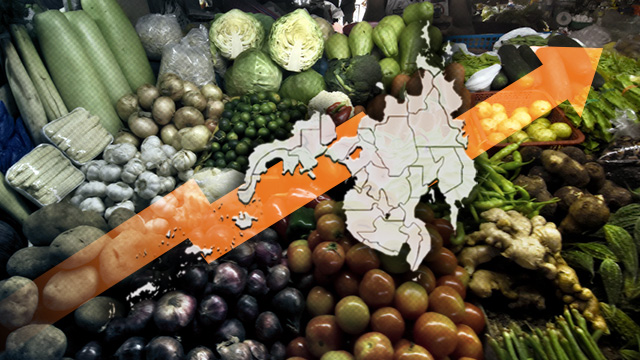 DAVAO CITY, Philippines – The inflation rate in all 6 Mindanao regions generally remained high compared to the national average of 6.7% in October although 4 regions registered lower rates compared to the previous month, data from the Philippine Statistics Authority (PSA) released on Tuesday, November 6, showed.

In its report, the PSA said the October inflation rate for all items increased to 7.6% in Northern Mindanao (Bukidnon, the two Misamis provinces, Lanao del Norte and Camiguin) from September’s 6.9% while Caraga (the two Surigao and two Agusan provinces) had 6.9% in October from September’s 6.1%.

On the bright side, the PSA report showed inflation significantly sliding in the Autonomous Region in Muslim Mindanao (ARMM) (Maguindanao, Lanao del Sur, Sulu, Basilan and Tawi-Tawi) from 9% in September to 8.3% in October while Zamboanga Peninsula (the 3 Zamboanga provinces) registered a modest decline to 7.6% from September’s 7.7%.

Across the Mindanao regions, the average inflation rate for food and non-food items went down to 9.3% in October from 9.65% in September amid the uptick in prices of rice and fish.

For tobacco and alcoholic beverages, the inflation for October was 21.13%, hardly changed from September’s 21.38%.

The rise in prices of clothing and footwear across Mindanao’s 6 regions at 3.23% was also noted compared to September’s 3.1%, which means it was now more expensive in Mindanao to buy, for example, a t-shirt or a pair of slippers.

Housing, gas, electricity and fuel costs also rose to an average of 6.28% in October from September’s 5.56%.

The sharp increase in fuel prices also made the cost of transport in Mindanao more expensive in October at 7.71% compared to September’s 7.63 percent.

Mindanao farmers are highly dependent on transportation, especially those in the rural areas, to deliver their products to the market.

Inflation on Health cost also rose to 8.1% in October from September’s 7.5%, which meant it was more expensive to remain healthy in Mindanao these days. – Rappler.com