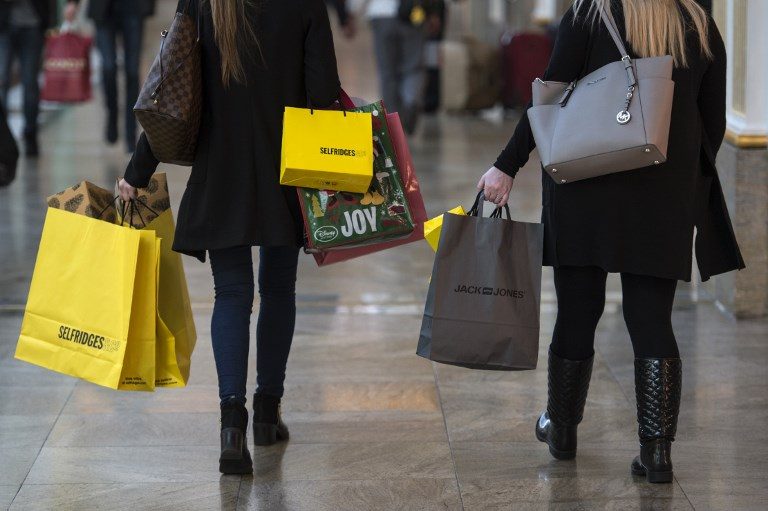 The nation’s biggest retailer, supermarket group Tesco, toasted rising sales over the key festive period as the supermarket giant was buoyed by promotions – but there were disappointing updates from other big UK stores, namely Debenhams, John Lewis and Marks & Spencer.

And in more gloomy news, overall UK retail sales saw zero growth in December – marking the worst performance for a decade, according to a survey from the British Retail Consortium and financial group KPMG.

“Retailers are battling a perfect storm of headwinds, with consumers lacking confidence… primarily because of Brexit, one would assume,” Markets.com analyst Neil Wilson told AFP.

Since Britain voted to leave the European Union in 2016, a drop in sterling – making imported goods more expensive – has pushed up UK annual inflation and prompted many consumers to tighten their belts.

Brexit has also sparked widespread economic uncertainty because of the threat of a disorderly departure from the bloc at the end of March.

“Online shopping is the big one … meaning (that) high street footfall is collapsing,” Wilson added.

“This has a snowball effect as the more shops close and replacements are not found, shoppers are left with little reason to head to the high street.”

Tesco on Thursday said its total like-for-like sales, stripping out new floor space, grew 1.5% in the six weeks to January 5 from a year earlier.

And in home market Britain, sales rose 2.2% on price-cutting for traditional Christmas vegetables and meat. That was Tesco’s best UK festive performance since 2009.

The grocer was also boosted by wholesale division Booker, which it bought last year to help slash costs.

But he warned that the retail outlook was unclear as shoppers become more price sensitive in the face of uncertainty.

“Prospects for the UK economic environment remain nebulous, with a nervous consumer potentially looking to shop on price alone.”

M&S meanwhile saw like-for-like UK sales sink 2.2% in the group’s third quarter, or 13 weeks to December 29, from a year earlier.

Unusually warm weather and falling consumer confidence made for a “very challenging” November, it noted, but held annual profit guidance.

Recent data from the GfK institute showed that consumer confidence in Britain fell to its lowest level in five years in December, as the purchase power of wages was eroded by Brexit-fuelled inflation.

Some 150,000 jobs were meanwhile lost in the nation’s retail sector last year.

At the end of 2018, music retail chain HMV collapsed into administration for the second time in six years, placing 2,200 jobs at risk.

“The latest (sales) numbers from the British Retail Consortium are proof, if it were needed, that this is a torrid time for retailers,” concluded Hunter. – Rappler.com